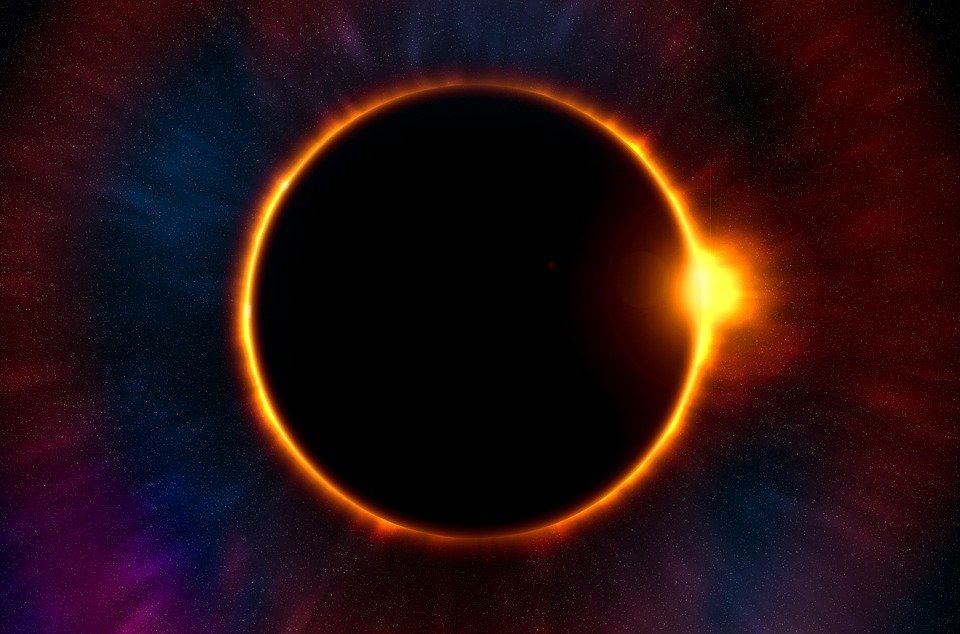 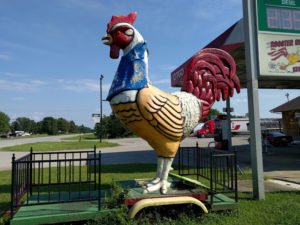 Rooster Run: As we arrived at our temporary home in Kentucky we saw this . I had to have a picture. You can only imagine the jokes your favorite accountant spit out rapid fire. I would share those jokes, but they are less than flattering to those involved.

I have a confession. I was jealous of Mr. Money Mustache. Well, not exactly of Pete himself, but of something he has been able to do for a long time that has eluded me.

Several years ago before I met Pete I read how he periodically traveled the country and rarely paid for a hotel room. There was always someone willing to put him up. One summer he spent in Hawaii at a guy’s house and he helped him with some remodeling as payment. There were several other incidents where he mentioned couch surfing.

My first attempts at this fell flat. You can’t just bed down in anyone’s home. What if your host is a serial killer (notice the empty corn flakes boxes behind the house)? What if the host thinks you’re a serial killer?

It really wasn’t Pete’s fault. I just hadn’t learned the fine art of securing accommodations outside the hospitality industry. I didn’t know enough people from around the country where this would work on a regular basis and couch surfing at a stranger’s home seemed to me fraught with risks.

Then I got an email.

Somewhere around the early 2000s Mrs. Accountant and I loved attending science fiction conventions. One of my favorite authors was going to be the guest of honor at a small SF convention in Schenectady, NY. The missus and I loaded the car and off to New York we went. 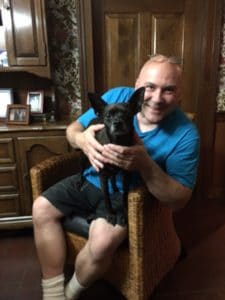 Meet Pharaoh, the new mascot of The Wealthy Accountant. Bernie’s little buddy was as awesome as our host.

The convention was very homey and of course my favorite writer at the time was there. Except there was a problem. The conference was cliquey. The author stuck tight to his close group of friends. I never had a chance to introduce myself or chat for a few moments. I was hurt.

It was really my fault. The author did stick with his acquaintances, but he did so to pass the time. It was a very small gathering and I doubt he would have felt comfortable standing around with his hands in his pockets. Sure, he could have made a move towards me when he saw me constantly looking on, but it had to have felt weird for him also. I never made the move and never got to meet my favorite author. . .

. . . until years later at WorldCon, the largest annual science fiction convention on the planet. This time I matured enough to speak with the author. There was also a small round table with said author that I attended as well.

I promised myself to never do what that author did to me: to leave a fan standing there, hands in pockets. I know how hard it is to introduce yourself to someone you only know by their published work. It’s hard on the author too. Engaging every guest at an event is impossible and exhausting. The talk is always light because there is no commonality.

Dealing with the Problem

In the beginning it was all about knowing how to do it. There isn’t an author on God’s green Earth I couldn’t walk up to and chat with today. I evolved. As easy as it is to work with clients locally, I was out of my league when the net was cast wider. In a few minutes I will share how I recommend you avoid my pitfalls and move right to the fun stuff of building relationships.

Remember the email? Well, at some point a month or so ago I must have mentioned publicly I was going to see the eclipse with my family. I kept it hush-hush for the most part so I could focus on the event. Seeing my first eclipse was important to me!

The hotel was booked and travel plans set. Then the email.

A reader, Bernie Keene, emailed offering shelter during my stay for the eclipse. My response was so quiet you could hear crickets. Which brings up a good point. If you contact me and I don’t respond it doesn’t mean I haven’t seen your email. Sometimes I think about it and want to think about it more later. Frequently it is forwarded to my office manager. Some I delete; it doesn’t work for me at this time. And other contacts are saved in a digital filing cabinet for review in the future. The worst part is you don’t know what I am doing or thinking. Due to time restrictions I am unable to personally respond to every request. It sucks and I know it.

Bernie had no idea what I was thinking or if I even read his offer. What I was really doing was checking the weather in my original location and Bernie’s for the day of the eclipse. Finally, the Friday before the big day I responded to Bernie and said I would be happy to show up the next day with the crew for several days. It was a happy acceptance.

To be fair, I did email Bernie around Wednesday to let him know what I was thinking. But his email was in my inbox for quite some time as I played with the idea.

When considering spending the night at the home of someone I don’t know requires a minimal amount of research. If it was only me I would not be as concerned. With Mrs. Accountant and the girls involved I decided to check Bernie out. He has a Facebook and LinkedIn page which made him look like a normal guy. I can attest he is a very normal guy after enjoying three nights in his home. 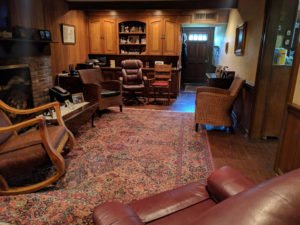 Here is where it happened , folks. Every problem plaguing modern society was solved in this room over a bottle of Spotted Cow beer. (Note: I always can break the ice by bring a case or two of Wisconsin’s finest brew.)

This brings up a good point. If you want to do something like this you should have at least a minimal social media presence available to the general public. No accounts make me wonder if it is who they say they are and all hidden accounts means potential drama.

A hotel is easier, but you never get to enjoy the local community the way you do when living with a local. For example, one of the things that impressed me most about Bernie was his pride in the accomplishments of his family. He showed me pictures of his parents (mom died in 2005 and dad is in a nursing home where Bernie visits frequently) and siblings. He told stories about each.

The home where we stayed belonged to his parents. It was converted into a bed and breakfast years ago where mom and dad Keene entertained guests for a decade. More stories were told. And you know how I love telling and hearing good stories. It is arguably the only real reason to live and is what makes life worth living.

We talked every evening until about 10:00 solving the entire world’s problems. Bernie had more than a few questions and I was happy to share my knowledge or at least my viewpoint. Which is yet another interesting point. When you open your home or visit another’s home you will have such an awesome experience. You learn so much and can share so many ideas. It is hard to sleep from the excitement.

I included several pictures of the weekend. It’s impossible to share all the things that happened and some was private. What I can tell you is how awesome a time my whole family and I had. And it all started from a simple email offering us a place to stay during the eclipse.

Now I knew why Pete did it. If I would have known how special these Conclaves are I would have been more jealous still.

How can you have your special weekend at Bernie’s? It takes a special kind of person to feel comfortable couch surfing in a stranger’s home. Reaching out to a blogger you enjoy reading can work, but until a connection is made might not.

It’s easier for me now because of my position with this blog’s growing readership. I also attend plenty of personal finance conferences now and know many of my readers personally as a result.

That is the best starting place for you as well. If you want the opportunity to visit for several days with a blogger or other people of like mind in your home or theirs, consider attending a few conferences first. Talk with people. Don’t make my mistake and stand in the corner afraid to talk because you don’t know anyone. My inactions didn’t fix that problem! 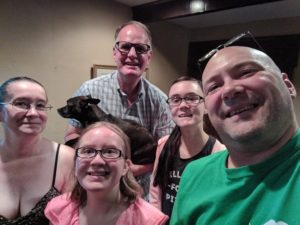 In back, our host Bernie Keene holding mascot Pharaoh. In front from left to right we have Mrs. Accountant, two junior accountants and some crazy accountant who couldn’t keep his puss out of the picture. (This my first selfie ever. Holding the phone while taking a picture makes my face look a bit, ah, more than you want. But I am happy.)

I know I can travel to virtually any area of the country and find a place to bed down. This blog might be the reason, but without attendance at conferences I would not have made the personal connection most people need to feel comfortable opening their home to what amounts to a total stranger.

There have been a few instances when someone was traveling to the backwoods of Wisconsin and asked for shelter. I agreed. Understand this isn’t a daily or even monthly occurrence. It happens now and again which makes it special.

By meeting people you have alternatives if you desire saving hotel costs with couch surfing. Schedules frequently don’t mesh so you end up speaking with several people before finding accommodations. Sometimes you end up in a hotel.

Each time a connection is made is special. You learn more about people than anywhere else when sharing an apartment. When all parties share the same values the gathering is always special.

Now it’s your turn. There is a world of friends out there waiting for you.

This is one of the few blog posts on The Wealthy Accountant where reading the captioned photos add to the story. Please, enjoy.

Finally, there has never been an instance when I stayed at someone’s home where they did not become a friend. Sure, there is geographical distance. The friendship is long-distance, but in our modern world that is not a problem when you decide to stay in touch. You don’t have to be connected at the hip and it’s best if your weren’t anyway.

We live a brave new world where we no longer need to cry out into the night alone. We have friends everywhere we turn. I have friends.