Warren Buffett made one of those extraordinary claims that require extraordinary proof in a 1999 interview with BusinessWeek. He said investing large sums is a lot harder than investing, say, a million dollars, where he felt he could generate 50% annual returns. Then he corrected himself and said he guaranteed he could do it.

Fast forward to modern times where Buffett has passed at least one rein to younger people to help him invest the massive pile of cash at Berkshire Hathaway (BRK.A). He said he didn’t place any significant restrictions on their investments as long as they didn’t get him in trouble, like buying Microsoft (MSFT) or tobacco companies like Altria (MO). (Buffett is a personal friend of Bill Gates, founder of Microsoft, and could have a conflict of interest if he invested in Microsoft. Buffett worries an investment in a tobacco company would harm his reputation.)

Buffett’s wisdom is legendary. In an interview I once heard him say when asked about tobacco companies: The product costs a penny to make and it’s addictive; What’s not to like?

Indeed! I believe Buffett avoids Altria mostly for reputation reasons. Most readers here, however, are interested in maximizing wealth and are unconcerned with owning oil, automotive, chemical or tobacco companies, as long as they are conducting business in a legal manner.

So how would Buffett achieve 50% gains with wealth levels readers here actually possess?

Buffett said he would look for arbitrage situations to capitalize on. This would mean scouring small companies with hidden value. Of course, this would be a full-time job. But hey, if you can pull a clean half mill a year it might be worth the effort.

If you are allergic to those levels of research there is an easier way if you are willing to earn an above market average, but probably less than 50% annually. 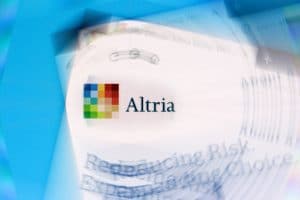 The market is at lofty levels as I write. Most listed companies are trading at nosebleed levels. Unless you are willing to consider the damaged (Boeing (BA) might be on your watch list) or the hated, you are stuck doing the research or accepting market returns, wherever that leads from this market level.

Altria has been a portfolio holding for me for a very long time and it has served me well. Before Buffett asked, What’s not to like? I already knew I liked the company, even if I never use the products.

Holding Altria for such a long time means I have spent considerable time researching the company. I was there when the world was coming to an end for tobacco in the 1990s due to the massive settlement.

It seems Altria (and tobacco in general) loves to go into a tizzy every so often. It makes for awesome buying opportunities where the stock price is lower and the dividend yield is higher. Rumors of tobacco’s death are greatly exaggerated.

Altria is starting to exit one of these “end of the world” scenarios again. The Juul/vaping scare was worse than the damage done in the 1990s when there was a real existential risk.

Of course, there is plenty to worry about. Juul isn’t working as planned. (When does business go as planned?) And cigarette volumes are in a long-term decline.

Altria does have something Buffett salivates about: pricing power. Altria is likely to increase prices faster than consumption declines. That means more dividends for patient investors.

Juul isn’t dead either! Yes, there are serious problems with getting the Juul transactions approved and Juul is dealing with litigation issues and a declining market share and increased regulations. The Juul approval is more a matter of time and what changes to the deal the government will require rather than a deal that will end up in court or unwound.

Vaping isn’t dead either! Growth in vaping has slowed. But if you looked at the vaping growth rates a year ago it was obvious growth rates had to slow. Juul was on pace a year ago to be bigger than the entire U.S. tobacco industry in less than 7 years. Reference Stein’s Law: Anything that cannot go on forever, doesn’t.

Health issues surrounding vaping was not due to Juul products. Illegal street vaping pods, usually involving THC, were the chief culprit and maybe the entire culprit.

Juul’s market share has declined from over 80% to ~60%. However, vaping has continued to grow so Juul is getting a smaller piece of a larger market. Like it or not, vaping is the future of nicotine consumption.

Scott Gottlieb, the former commissioner of the FDA, has managed to get himself a cushy job at Pfizer (PFE). Gottlieb has made it his mission to bad mouth tobacco, but has a special hate for vaping and Juul, the leader in the industry. Now why is that?

Well, vaping has the real possibility of reducing tobacco use and is partly responsible to the increased rate of decline in cigarette use. Gottlieb should be happy with that, but seems to hate the good news. What gives? First, Gottlieb works for Pfizer now, which sells the leading smoking cessation product, Chantix. It becomes clear quickly why Gottlieb is more addicted tobacco than an 84-year-old chain smoker once you realize his income stream is at risk if smoking rates decline too much or too fast.

Second, Chantix is reported to be no better than nicotine patches. Nicotine patches are cheaper than Chantix with fewer side effects. Gottlieb doesn’t seem to want to address this issue during public interviews.

Third, Pfizer has been busting tail to get a serious warning label removed from boxes of Chantix. Gottlieb took care of that problem promptly once he was working for Pfizer. I’m not saying Gottlieb did anything illegal or unethical. I’m just saying the circumstances does lead one to wonder.

Once you consider Gottlieb’s past with his comments, it becomes clear he likely has an agenda that might not jib with reduced cigarette smoking rates. When regulators and investors realize Gottlieb seems to be encouraging more tobacco use to benefit his employer’s bottom line, his crusade against vaping declines.

I don’t know if Warren Buffett could actually deliver on his promise of 50% annual gains. I do know that arbitrage is an excellent way to spike your investment returns.

A Peter Lynch style review of Altria reveals massive unrealized value. It is easy to forget Altria is more than cigarettes. There is a dash of wine in the portfolio, non-combustible tobacco products, Juul, Anheuser Busch inbev NV (BUD), Cronos (CRON) and on! Nicotine Pouches in the product line as well.

Let’s take an impossibly negative approach to Altria and see if the company survives or is loaded with large hidden treasures. 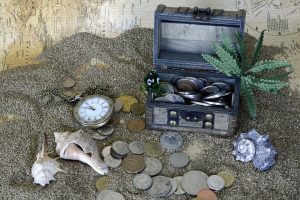 For starters, let’s value Juul at zero. I know, I know. It is worth at least something, but we take no prisoners around here when we tally up a business’s valuation under a worst case scenario.

Next we gut Cronos’s value and place it at zero, as well. In fact, let’s just value everything outside tobacco at zero, with the exception of BUD.

Altria has a market cap of ~$95 billion. If everything they own is worth nothing, except for the investment in BUD, which has no restriction on the holding starting in 2021, Altria has a core valuation of ~$81 billion.

This valuation is for a company kicking out over $7 billion in cash flow without help from Juul!

And let’s be honest, all that other stuff Altria owns has some value. How much is still to be determined. That is how it works with businesses. Value has to be created to be realized. (Remember the formula for value creation: Return on Invested Capital (ROIC) minus Cost of Capital (COC). A positive number is value creation.)

What we do know is Altria’s core business is kicking out loads of cash to pay down debt (on the 3rd quarter earnings call Chairman Howard A. Willard stated Altria paid down $1 billion of debt in the 3rd quarter and planned on paying down a similar amount in the 4th quarter of 2019), buy back stock, pay dividends and grow the business.

Altria’s upcoming 4th quarter 2019 earnings report will clarify some of these issues. I am interested to see how much debt was actually reduced. I also want to see how cigarette volumes are holding up and if we will have two or three price increases in 2020.

Juul is the unknown. Will more write-down be in the cards? My gut tells me things are stabilizing at Juul, but gut is not an acceptable investment tool and has a poor track record. Cronos still has a lot of work to do to reach profitability.

A bright spot is the non-combustible tobacco products. Chew has been growing, but is still a relatively small part of the business.

What interests me more than any other product is iQOS — the heat, not burn product — licensed from Philip Morris International (PM). FDA conditional approval is a significant advantage Altria received in 2019. iQOS is rolling out in a measured fashion as you read.

The future of tobacco is in the non-combustible, reduced-risk products. Wouldn’t it be a kick if Altria found serious value in iQOS instead of Juul?

Either way, I think there is massive hidden value in Altria. With such a diverse mix of products, Altria is well situated to keep pumping out large, growing dividends for a long time to come.

Unless you have a convincing argument people will quite smoking tobacco and using weed, chewing, vaping and drinking beer and wine, I think Altria has a bright future.

* Notes: As longtime readers of this blog know, I own shares in Altria and use it as an investing test model. Originally written for Seeking Alpha, this post provides an update on my reading of the tea leaves. I still own and plan on continuing to own shares in MO and PM. I own a small amount of BA and MSFT as part of my watch list. I do not own shares of other companies mentioned in this post at this time with no plans to open a position either.