Profiting From the Next Recession 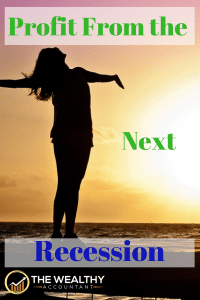 Rare is the decade where a capitalist society doesn’t experience an economic slowdown. Call it a soft landing, recession or depression, the results are the same with varying degrees. Economic slowdowns and declines are inevitable under capitalism.

Expansions are born from the depths of the previous economic decline. Inflation tends to be low and unemployment high. Pent up demand is waiting for an influx of goods and services to satiate desires. As businesses whittle down inventory, the recession eases. A glimmer of increased demand begins the cycle all over. Employment increases to meet demand. Eventually wages climb as the labor market tightens.

Increasing productivity means even a slowdown in growth can start unemployment ratcheting higher; no actual recession needed to send hearts aflutter. Sometimes the economy slows sharply as in the early 1980s and 2008. Most recessions since World War II have been mild, with GDP declining 2% or less. The 2008 recession lasted 18 months and it felt like the world would end. In reality, GDP declined 5.1%. The 2001 recession, in comparison, lasted 8 months with a .3% decline in GDP.

The last time economic activity declined more than 10% was in the waning days of WWII. Reduced military spending caused the GDP to dip 12.7%. Unemployment didn’t climb much in 1945 as the U.S started the switch back to a peacetime economy. Before WWII, recessions more often than not exceeded 10%. Economic downturns were far sharper in those days and lasted longer. Still, unemployment can climb quickly to double digits or nearly so. When pink slips start flying they come fast and furious.

Long periods of economic bliss lull people into a false sense of security. Debt grows larger as a percent of income as households are more confident.

Inflation is creeping higher. The Fed is slowing increasing interest rates to reflect a normalization of interest rates after the deep 2008 recession. Unemployment is near record lows and employment numbers are off the scale! Warning signs are beginning to show as consumers are reaching their credit limit, ending the buying binge. The cycle is nearing the point of renewal.

Renewal is painful if you’re unprepared.

Overproduction and debt usually play a role in most recessions. U.S. production isn’t as out of touch with demand as world production, most notably in China and Germany. However, by previous economic standards, the economy isn’t stressed enough to trigger a downturn of any size. Things look really good right now. But. . .

Tariffs are the wildcard. Tariffs are designed to slow the economy, regardless the claims of politicians. Business is well aware of the seriousness of the current rush to impose tariffs. Tariffs also push inflation higher.

Signs are showing in the EU, China and other countries. The U.S. so far is humming like a well oiled machine. If tariffs continue ratcheting higher the U.S. will eventually stumble, too.

Tariffs are taking on a different flavor this time around. (This time isn’t different, however.) In 1929, tariffs were adjusted across the board. Retaliatory tariffs were levied nation against nation around the world. Today we see the U.S. imposing tariffs and the target nation strikes back with narrowly focused tariffs against the U.S. only. Without the U.S. a vacuum has formed. Most nations are building new economic alliances without the U.S.

There is no doubt tariffs will cause pain around the world. The U.S. already discovered how the new world order of tariffs will be played out. Harley-Davidson, an iconic American company, is moving some production to Europe to avoid tariffs. If the intension of the tariffs was to bring jobs back home, it’s having the opposite effect! Time will tell how this new world order plays out.

The world isn’t going to end! You can drop the end of the world stuff right now. However, there is economic pain coming. The exact cause is not yet known. The possibilities discussed about are strong possibilities. Then again, it could be something totally out of left field, like Lehman Brothers in 2008. You never know.

What we do know is that this cycle is long in the tooth and it’s time to prepare for the inevitable slowdown in economic activity, even if it doesn’t culminate in a full-blown recession. Unemployment will climb someday and probably sooner than most people expect. If tariffs bite as they did in the past, we could be within a year of slower economic growth.

Since my crystal ball isn’t any clearer than yours, all I can do is provide good advice that works in good times and bad. Wealthy people have certain habits you need to acquire ASAP!

For several years now I’ve warned clients to reduce, or even eliminate, debt. The 2008 recession only hurt if you were saddled with debt payments. Without debt, 2008 was a minor inconvenience. Debt is a common recession culprit. Don’t be part of the problem! Your insistence you are responsible with debt crumbles when unemployment makes an appearance in your household, your income properties are vacant or the tenants refuse to pay, or your business or side hustle no longer provides the cash needed. I hear the “responsible with debt” mantra often. I’ve also been around long enough to watch said clients have their home repossessed.

Debt is the most important issue to address. If you are deep in debt, there are steps you can take to reduce liabilities fast. Normal pay down of debt may not be fast enough to give you a margin of safety before the recession strikes. Prices are still high. Selling assets at a high is better than liquidating later at any price, or worse, giving assets back to the bank.

I firmly believe you should NEVER have debt on a vehicle. EVER! If you need a car loan you can’t afford the vehicle. If you bought real estate the last few years, consider reducing debt by selling highly appreciated properties. I know real estate never declines in value (egads!), but selling a property or two to eliminate debt obligations allows you to sleep better in any economic environment.

Here is the last word on debt; I promise. All consumer debt must go! No credit card debt! Period.  Now is the best time in a generation to reduce debt. Your assets are worth more now than in decades. Take advantage of your great fortune.

I’m now going to share advice I give to all clients near, entering or in retirement.

Retirees need to keep ~ two years of spending in a liquid account (money market (I like Vanguard), Discover Savings, Capital One 360 or T-bills). If the market keeps rallying, take living expenses from your index funds. If the market declines, use the liquid funds to live on. Divert capital gains and dividend distributions to the liquid account instead of reinvesting. This gives you a margin of safety of several years before you’d have to either reduce your lifestyle or sell index funds in a down market to cover living expenses.

For those not in—or near—retirement, the same philosophy applies. Rather than two years of living expenses in liquid funds, you may wish to only keep one. In a perfect world you would have Roth IRAs so there would be no tax consequences of moving some index fund money to the money market account.

Facts and circumstances will determine the correct level for you and the accounts you increase liquidity in. Having liquid funds to cover living expenses is a powerful tool to weather any economic storm. The only issues not covered are outliers. An uninsured medical emergency can throw any plan awry. Disability is another potential problem. It’s impossible to cover all possibilities. Having a cushion, a margin of safety, stacks the deck in your favor.

A Hard Man to Break

I don’t predict the economy or the stock market. Far better than me try and fail miserably. This isn’t about market timing! This is about structuring your finances in an appropriate way.

Debt is the worst cancer. Debt is a crisis, especially this late in the business cycle unless you think this time is different. (It’s not!) Low debt levels are always the better path. Virtually every wealthy person you meet says the same thing: leverage (debt) bites you in the end.

Keep adding to your retirement accounts. This is not the time to break a good habit. If you don’t have a lot of non-qualified (non-retirement) money you may have to keep some IRA or other retirement money liquid. If your finances are not affected, no problem. If you do face financial stress you at least have liquid funds available (even if a tax penalty applies) to cover living expenses for an extended period of time without the bank knocking at the door.

Opportunities are created in recessions. The U.S. has had 49 economic downturns in its history. We get to celebrate the grand ol’ 50th with the next recession. Limited debt and liquid funds for spending needs allows you to keep your money invested for the next inevitable economic expansion. The winners of the last recession were the ones who stood pat or even bought while the market was down.

Things have to get really bad for people without debt to suffer. A liquid nest egg coupled with no debt requires a complete system failure before you feel any real pain. And if the system does fail there is nowhere to hide so it doesn’t pay to prepare for it. It’s lights out.

Amazon is a good way to control costs by comparison shopping. The cost of a product includes travel to the store. When you start a shopping trip to Amazon here it also supports this blog. Thank you.