Are Penny Stocks a Serious Investment?

One of my favorite pastimes is thumbing through the financials of public companies. Hidden gems do exist, but they are rare with the myriad analysts using serious computing power to scrub large firms daily. This is one of the reasons investing in an index fund makes so much sense.

There are good investments in the large company world. As I write, Apple Inc. has around $50 per share in cash in the checkbook. When you subtract cash the enterprise value is in the low teens. This is a good value from most perspectives. However, there are risks associated with Apple. First, it’s hard to move the needle on such a large company. Second, they manufacture a large part of their product in China. A quick glance at recent news and it becomes clear the risk involved. Third, each product launch needs to keep growing larger at a rapid pace to stay on top the pack. The one thing Apple has going for it is a large margin of safety.

The Wide Open World or the Wild West (You Decide)

Large international public corporations aren’t the only game in town. There is another world fraught with many risks and the promise of undiscovered gems worth many multiples of its listed price.

These quasi-public companies are followed by virtually no one. Worse, audited financial data is hard to find if available at all. And the biggest problem of all: insider trading. 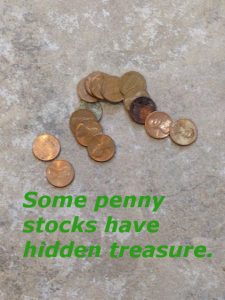 People commonly call these unique animals penny stocks. They don’t always trade for pennies, but frequently trade under $5 per share.

These companies are listed on what is called the Pink Sheets, a throwback to the days when their quotes were printed daily on pink sheets of paper. Quotes were hard to come by in the past. Today, most of these companies can be pulled up from most online trading platforms (E*Trade, et cetera). One thing to remember, pink sheets is a quotation service only. Online brokers get their quotes for these stocks from that source.

The reasons for listing on the pink sheets are varied. A large number are outright scams. Others are companies who have fallen on hard times. Large international firms outside the U.S. sometimes opt to list on the pink sheets so they don’t have as heavy a reporting burden. Nestle is a prime example.

The world of small stocks isn’t littered with pump-and-dump scams only. Many small banks also list on the pink sheets. A small, one-branch bank in a small town in rural America has no chance of selling shares on the broader exchanges. The reporting requirements alone would be disruptive to their business model. The small bank can instead opt to list on the pink sheets. They will still report to the banking regulators and provide some financial statements on which to make an investment decision. Find a small one-branch bank near where you live and pay them a visit. Ask if they have stock you can buy. You might be surprised. They sometimes pay an attractive dividend.

A Round of Golf, Anyone?

Your favorite accountant has some experience buying stocks from the pink sheets. It doesn’t happen often because there is far more garbage then gemstone in the detritus. The smell tends to get on your hands and it doesn’t wash off worth a darn.

Outside tax season I like to waste an afternoon several times a year scouring the pink sheets based on geographical location of the listed company. The screener I linked also has OTC listings in addition to the pink sheets. I’ll let you play around with it on your own.

For our discussion we will focus on one stock I did buy in the early 2000s. I set the screen to list U.S. companies only. I started scrolling down the list looking for all listings in Wisconsin, my home state. I made a note of each Wisconsin listing.

My hopes weren’t high I would find anything of value. Even if a gemstone rose to the surface I may never recognize it. Remember, information is hard to come by on many of the companies.

One name jumped out. A golf course less than a two hour drive from my home caught my eye. I was vaguely familiar with the establishment and didn’t know they were listed.

This is where it gets risky legally. The golf course on my radar was interesting so I started a pet project of researching the company. They hadn’t published any financial information in quite a while. Intrigued, I decided to go one step further. 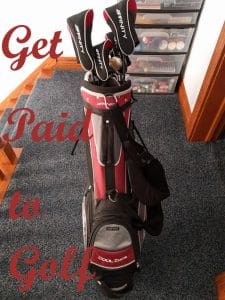 My first reaction to any pink sheet listing is to stand clear. Our friendly golf course just hit me right. Wanting to know more I took a day trip. I can’t golf worth a crap, but I do get more value than the average golfer because I get to swing more often than they do. The trip was all in the name of research.

The golf course was well kept when I arrived. The parking lot was full; the golf course teaming with old guys wasting their day; and the clubhouse was doing brisk business. I was excited!

My research to his point was similar to analysts using satellite data of Wal-Mart parking lots during the Christmas shopping season. There is nothing illegal about visiting a company whose stock you are considering for purchase. Having a drink and playing a round of golf (I did) is also acceptable behavior. No security laws have been broken.

However, I had to be careful! Since financial reports were not published in a while I couldn’t jawbone with the golf course’s accountant to glean information. It would have been risky to even jawbone with bartenders or anyone connected to the club. Trading on non-public information is called insider trading a very illegal!

The stock of the golf course traded around $3. Based upon their location (close to my home) and how busy they were when I visited, I decided to buy. I bought all my shares from slightly under $3 up to $4. Because of the risk I would hear something I shouldn’t I never visited again. I bought $30,000 of their stock over several months and sat on it. There was no dividend so it was one of those things I collected on the back shelf and didn’t think about for a long time.

A few years later I checked on the stock to discover it started climbing at a slow and steady pace. My $30,000 was worth six figures. I was happy! I also knew if I tried to dump my shares I would probably not get the current listed price.

I tucked the stock on the back shelf again. Intrigued, I periodically checked the price. It kept slowly climbing. About six years after my purchase the stock was in the mid 20s when it disappeared. Oh-oh!

My dreams were shattered. There were still no financial reports and a quick drive to the golf course showed they were still open. Was it a scam?

Nope! A few weeks later a check came in the mail. They were bought by another golf course for cash. My reward for six years of holding the stock was a 14x gain.

Before you run out and try to replicate my experience, know lightening has only struck once in my field. I got lucky. My luck was weighted in my favor by verifying the company was really there and viable. (They had customers!) I bought with a lot of blind faith. Every other pink sheet investment (there have only been a few) produced less than respectable returns.

The golf course was my biggest venture into the pink sheets. It was also a bet (you decide if I invested or gambled) I was willing to take because it looked like a nice place. All public information legal to trade on.

My other investments from the pink sheets and OTC markets usually involved banks. Returns were less than spectacular. In some cases I even lost money. In my defense I never took a flyer buying a true penny stock.

Where is the Respect?

Penny stocks in rare cases can be a respectable investment as my experience has shown. I do NOT encourage such investments! They are very risky and only for those willing to do some extra legwork without crossing the boundary between legal and insider trading. You also must be willing to lose 100% of your investment.

For some reason a few penny stock journals follow this blog and republish articles from time to time (always with permission). I wanted to share my one positive example so these guys have an article that will resonate with their readers.

For regulars around here, I still recommend the bulk of your money finding a home in a broad-based index fund. This is the best place for most people to invest long-term. If you have an itch to scratch digging for buried treasure the pink sheets and OTC markets have possibilities.

One caveat. You will spend a lot of time digging before any morsel reveals itself. It’s just the nature of the game. The good news is that Wall Street isn’t watching. You don’t have to compete with large hedge funds and the super-wealthy. The value of all pink sheet companies combine is around $1 billion. Too small for mainstream investments bankers to waste their time on.

Now, if we’re done here, I know a clean golf course where we can knock a couple balls around.