The Bittersweet Joy of Raising Children 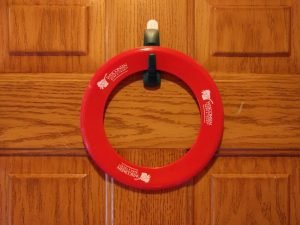 My youngest daughter turned 18 on Wednesday and while Mrs. Accountant and I are not yet officially empty nesters the handwriting is on the wall. High school needs to be finished and an adjustment into adulthood is in order before she leaves. The timing is the only thing undecided.

My oldest daughter (I have two girls) stuck around home milking mom and dad for all it was worth. At first the prodding was gentle. As the years passed the cattle prod was more insistent. It’s wasn’t about her behavior either.

Both my girls are well behaved and quiet. Neither took to drinking, drugs or promiscuous behavior. Brooke, the youngest, enjoys playing on the computer and working outside. Heather buries her nose in a book or online research. In many ways it was like they weren’t here.

Quiet and well-behaved doesn’t mean we didn’t enjoy quality time with the girls. We spent many hours outside throwing Frisbee. “Puss arm!” and “Butter fingers!” were shouted often as we laughed away an afternoon. Walks to the creek or around the farm are all fond memories. Fire pits, cook outs, and farm animals filled the formative years of my girls. I hope it was enough.

Where Did the Time Go?

Intellectually I knew my children were growing up and working toward a life of their own. Somehow it never sunk in that it wouldn’t last forever. Still, I managed to sprinkle each day with my wisdom and sorted humor. It’s amazing my kids survived at all with a dad like me.

It was impossible to know if my lessons were sinking in. Advice on interpersonal relationships was hardest because your choice in life mate determines a serious percent of your wellbeing and happiness. A good marriage or dedicated relationship (or whatever they call it these days) is one of the most important decisions you will make in life. Money is important, but I can be very happy and poor with the right woman next to me. I was extremely lucky in meeting Mrs. Accountant. Very lucky indeed! She stood firm through the roughest of storms. We weathered a lot and grew stronger over the years. 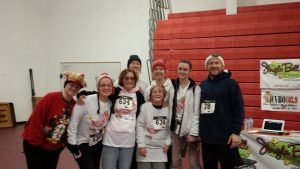 Here I am with Mrs. Accountant, my girls and nieces at the Jingle Bell Run.

Money was also a common discussion. I kept repeating my mantras hoping something would stick. Instead of demanding my girls live frugally I repeated things like, “You don’t save money by spending it.” Of course I had to qualify the statement as they got older. Spending money on your health is usually a good investment. Changing the oil in your car is spending money, but it does, in a way, end up saving you a lot more.

The two areas you are told never to talk about in public—politics and religion—were common discussions in the Accountant household. We’ll skip the religious conversation for brevity and to allow time for a short detour through politics.

Remember, the original, and still primary, goal of this blog is to leave my children a legacy of my knowledge and experiences. You are here to observe and comment if you want (and do it respectfully). My political ideology is definitely centrist with mild detours to the left and right.

Ronald Reagan was president when I reached the age of majority. I liked Reagan and voted for him when he ran for a second term. It was my first presidential election. Age and experience have tempered my appeal for Reagan, but I still like the guy. The first Bush got my vote, but his performance and communications skills left me wanting.

I voted for Clinton twice. The Monica Lewinski thing didn’t bother me. I knew it was dirty politics only. Considering what we see today neither party is much concerned with ethical behavior when it comes to women. It’s a talking point until they get caught in their hypocrisy.

What I liked about Clinton was his understanding of economics and government finance. The Republicans cried about the deficit once a Democrat was in office. President Clinton knew exactly how to balance the budget and he did it! Clinton knew he could keep a strong economy with growing government spending and balance the budget if he kept spending increases to 1% below the inflation rate. A deficit at 4% of GDP was resolve in about four years on its own. I thought it was genius and few ever talked about it. I guess you have to be an accountant to understand.

Bush II never thrilled me and I voted for Gore and Kerry. My opinion of George W. Bush has improved over the years. I never disliked the man, but I felt he was ineffective and too much a puppet of the establishment right. I’d still sit and have a beer with the guy. I think he is an honorable man forced onto a very big world stage.

I liked President Obama. He was cool under every kind of pressure. I voted for Obama the first time around and would have voted for McCain f he’d have picked anyone else for a VP. John McCain would have been a good president. His just right of center ideology sat well with me. He also played fair with both sided of the isle. Something I admire as professionalism.

Trump is dangerous in my opinion and I’ve shared my thoughts personally with my girls ad nauseam on the subject. Leadership by tweet is not leadership in my world.

Back to “Where’d the Time Go”

Politics is an important discussion point to have with your children. Your children will pick up your position on the political spectrum and that isn’t a bad thing. They’ll stray when they’re ready, also a good thing.

Politics is important and an important part of this discussion because politic affects many money issues. Tax laws can help or hinder you on your way to financial independence. Retirement plans offer tax advantages. The level of advantage is an inducement toward solvency. 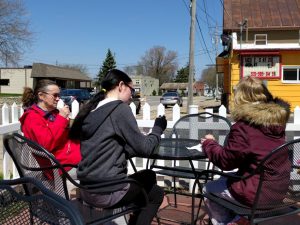 Enjoying an ice cream at Frogg’s in Sherwood, Wisconsin.

My disdain for Trump doesn’t cloud my judgment because no matter how much I like or dislike a political leader I know some ideas they have will sit well with me and others less so. For example, I agree we needed tax reform. I’m not as excited the final result will allow for a long-term lower adjustment in rates, but since my crystal ball is cloudy on all future events I withhold judgment. Trump’s willingness (and last I heard a soon to be real event) to have a face-to-face discussion with Kim Jong-un is something I highly approve of. I also think Trump is more qualified on this one issue (face-to-face with Kim) than any president to ever deal with North Korea. I’ll withhold judgment, of course, but am guardedly optimistic. (As I read this aloud to Mrs. Accountant and Brooke I was informed the meeting will not take place. I hope Trump reconsiders. This is his strong suit.)

And then we realize the years have got behind us and the kiddos are finally adults.

After a slow start getting off dad’s couch, Heather has shown real maturity as she gains new friends in college. She is heading to China this summer with future plans of living permanently abroad. I wanted her to get off my couch, but I didn’t think she would travel so far away.

Heather works most Friday’s in my office. She is starting to miss more and more as she continues to spread her wings. She was coming home every weekend. Now she misses some weekends. Soon she’ll be gone for a month or longer and then. . .

Yeah, I miss my sweetie. A good parent teaches and then allows, even insists, their kids build a life of their own. Mom and dad are always there as a sounding board. However, flying is a solo sport. I gave them the tools. It is up to them now. I’d be a liar if I said my heart doesn’t flutter as I watch.

The New Kid in Town

For the Accountant household there are no new kids in town. The kids are all gone. Brooke is an adult now as she reaches for high school graduation and big plans of her own. She has no plans of moving out at this time. But before long the call will be heard and eventually answered. It is the way life is meant to be.

The house feels emptier without Heather around most of the time. She stays up really late (midnight or later) while Brooke and mom go to bed early (around 8). My bedtime is in between. I love the quiet time and house to myself for reading and writing. Yet, there is an emptiness causing me unease. I doubt it will ever go away.

I don’t regret the path I’ve chosen. Mrs. Accountant was better at staying at home than I ever was. Sue raised our girls with incredible patience. She has been a guiding angel for our children and her wayward husband. I can only imagine what she feels as the house grows quieter.

Whenever the girls had an event I was there. Except for 14 months I was self-employed my entire life. The drive which pushes me incessantly also knows when to back off. When it comes to family nothing is more important. I’d rather be poor in cash and rich in family than the other way around. Money is something nice to play with and fill time, but family is the real meaning of love and happiness. Family is what makes life worth living.

Tax season keeps me in the office long hours. Early in my career the office was our remodeled basement. Since 1995 I’ve enjoyed a storefront to escape to when practicing my passion. For nine months a year I am home a lot. Tax season is a nice reprieve for the family from a crazy dad. Then it’s time for the prodigal dad to return home.

The day is fast approaching when Mrs. Accountant and I can sit alone together and enjoy uninterrupted time. It’s a skill we haven’t had much time to practice. There is a sadness in the approaching moment. 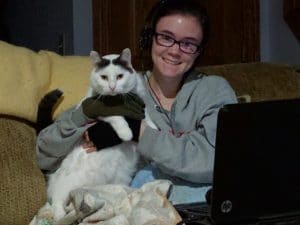 I’ve always idolized older people who have the time to satiate the lust for learning. The ability to while away a day immersed in books appeals to me. I do also understand it is better to want than to have. It may prove difficult to concentrate when my thoughts keep straying to the years when my girls roamed the house.

I hope I don’t second-guess myself. That would lead to misery! I made the choices I made because I thought they were right at the time. There is no value in torturing myself with paths I didn’t take.

The lessons have been taught. All that remains is gentle support and guidance. It is a bittersweet joy raising children. Never once did I dream I would feel like this. Honestly, I can’t remember a time when I thought about the instant my last child would leave our home to live her own life. I never prepared because I was unaware of what should have been obvious.

Still, I have no regrets. I brought two fine young ladies to adulthood. For all my flaws they turned out darn good. There is no doubt Mrs. Accountant had a lot to do with it.

Even Pinky, our cat, sits in the front window more now. She stares to the distant horizon and chirps with thoughts I can’t even begin to imagine. Pinky probably feels it’s time for her to roam free too. She might also want to consider the difference between wanting and having.

Soon the house will be empty. Then I can start dating that young lady again I met oh so many years ago. No kids. We can dream again of our future.