It Never Pays to be a Bear 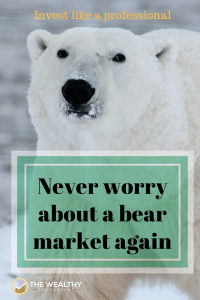 Accounting offices are prime for solicitation. Tax professionals have a powerful relationship with their clients. Accountants also know a lot about their clients due to the data collected to file an accurate tax return.

Before someone got the idea to enlist the tax profession, it was common for insurance and securities salespeople to wine and dine the accountants in the area to build a relationship where the accountant fed ripe clients for plucking. (Did I say that?) Then H.D. Vest Financial Services changed the face of the accounting, tax and investment industry in one fell swoop. The world hasn’t been the same since.

As many firms did, I joined the herd of lemmings to the cliff. It wasn’t a bad choice. I learned a lot from my tenure in the field. I also discovered things I found revolting.

H.D. Vest Financial Services contacted me and I was a willing accomplice. The money was very nice, but I also had a massive interest in securities. If the opportunity in securities would have presented itself before taxes I’d probably be writing The Wealth Broker. (Sounds more like an oxymoron to me.)

H.D. Vest required we attend two major seminars around the country each year. (They had me with the traveling schedule.) Every December we met in Dallas (not far from the FinCon hotel last fall). The other event floated around the country.

A Story from the Brickyard

The keynote speakers at H.D. Vest events were influential members of the community. The one speaker who stuck out the most for me was Nick Murray.

Murray cut his teeth in an earlier age when hawking mutual funds took some effort. By the 1990s selling mutual funds in a roaring bull market was easier than taking candy from a baby. Murray’s advice and stories always stuck with me.

The age-old question was front and center: Where is the stock market headed? Clients are always nervous about investing. They’re afraid the market will tank the moment they buy. Murray had the perfect retort. He said he had no idea which direction the next 20% move in the market would be. He didn’t know the direction of the next 50% move, or 75% move or even 90% move. It could go either way. Up or down. But he guaranteed his clients the next 100% move in the stock market is up, not down. He ended by saying if he was wrong there wouldn’t be anyone around to sue him or complain. 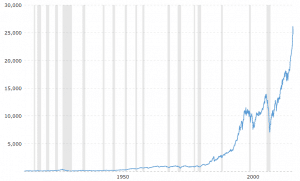 A Story from the History Bin

Murray was on to something. Using the Dow Jones Industrial Average (DJIA) as a yardstick we can check how well Murray’s advice stood the test of time.

Charles Dow published his first index, a precursor to the DJIA, on February 16, 1885. The current industrial average was first published on May 26, 1896. We will use the May 26, 1896 start date for our history lesson as before that the average was more a transportation index and in fact is the basis of the current Dow Transportation Average. The DJIA started with fewer stocks, but by the late 1920s had the familiar 30.

One thing we are familiar with is the sound of the business news broadcasts saying, “Today the Dow Jones made a new high . . .” It happens a lot. There are certainly lulls between new highs periodically, but the upward pace almost seems to be persistent.

With so many “new highs” in the DJIA (and broader indexes) have you ever wondered when the last time was when a new low was made? Well, I have the answer if you’re interested. On August 8, 1896 the DJIA hit its all-time low of 28.48. We haven’t heard a new low in the Dow for over 100 years! The last time a “new low” was made was in the late 19th Century. 19th Century!

The chart in this post illustrates the relentless climb higher of equities. Notice the pimple about an inch from the left side of the chart. That’s the 1929 Crash and Great Depression. The scab about an inch to the left of the year 2000 is the 1987 market crash where we shaved 22.61% off the market in a day! It was a good day to buy stock in Fruit of the Loom. Now I know why Warren Buffet had to buy the company with guys wearing fruit costumes.

The most telling trait of the chart is the parabolic look the closer to the right you get. But if you pick any time in the past it usually has a similar look! In the 1980s it looked straight up. Same in the 1960s. Same in the 1990s. You get the drift. As the market ratchets higher the older areas of the chart look smaller and smaller until even major fluctuations (from the viewpoint of people living through the event) are pimples on the chart if they can be discerned at all.

Told by an Idiot, Full of Sound and Fury, Signifying Nothing

To top it off, your favorite accountant mentioned what he thought was an interesting fact. He moved to his highest cash position in his adult life at 52%. Half his, ah, my money went to cash in late January. How lucky can a guy get!

I got lucky because I wasn’t timing the market. Another significant business prospect (a non-public company) came my way. I don’t like borrowing money so I liquidated some serious positions. If all the money isn’t needed some will find its way back into the market. Regardless, my retirement money is still going into Vanguard index funds 100% as it peels off my paycheck. I also automatically deposit money into my non-qualified (non-retirement account for non tax people) Vanguard index funds every month on the 7th. It’s the law!

Now, with my idiotic profession of good luck earlier this year, we must focus on the only way to invest in the market. Like Nick Murray, I have no idea which direction the next 20% move will be. Same goes for the next 50% move, 75% move or even 90% move. But I guarantee you, as did Murray, the next 100% move will be up! The stock market has been doubling again and again from the beginning.

Is it any wonder the DJIA made an all-time low a bit over two years after the average began reporting without ever digging lower? Even the Great Depression couldn’t break to new lows! Yet again and again we hear news of a new high. Maybe this time is different, but I wouldn’t count on it. Business and the economy keep growing with minor hiccups along the way. Bear markets are scary from the inside because somebody is in the corner crying, upsetting all the nice people milling about.

There is one final argument to stay invested in broad-based stock index funds no matter where the market is at. It involves the Cuban Missile Crisis of October 1962.

The DJIA only lost a mere 1.2% during the nuclear crisis. That didn’t mean panic wasn’t under the hood. There is the story of a young stock broker who started screaming to sell when an older, more seasoned, broker in the office told the young broker to calm down. The young broker yelled the world could end at any moment and he had to sell. The old broker put a hand on the young broker’s shoulder and said, “Buy. If the nukes don’t fly the market will rally.” (The DJIA added over 10% by the end of 1962.) “If the nukes do fly the trades will never clear.”

The same is just as true today. Could President Trump really cause the end of the world? Maybe. But if the world doesn’t end you’re going to look mighty foolish.

Human history is marked by perpetual growth for many thousands of years. The growth trend has been marred by periodic declines, even extended ones. In the end it was always a losing bet to bet against humanity. Progress has been unrelenting for a very long time.

It always looks like a top. Always! But then we go higher. And if I’m wrong the trade will never clear. (Or at least nobody will be around to tell me how wrong I am.)

And for the record, bulls make money. Bears and pigs both get slaughtered.

Now this is not the end. It is not even the beginning of the end. But it is, perhaps, the end of the beginning. —Winston Churchill