The Real Reason the Stock Market is Going Up 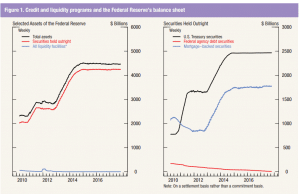 After nine years of steady growth in the economy and stock market both indicators have taken a sharp turn north. Economic stimulus in the form of tax cuts in an already good economy holds the possibility of destabilizing the whole economic structure.

There is ample concern over the staying power of the advancing stock market. Valuations are at or near record highs in all measures. All news seems to be good news. Predictions for future gains have reached nosebleed territory.

Investors need to know why the market is climbing so fast to protect their ass-ets. Those close to or in retirement need to take special precautions.

To accomplish the goal of explaining why the market is climbing I need to get technical. Numbers and charts have to be part of this discussion to understand why the economy and markets are behaving the way they are.

A long time ago in a country close by there once was a housing bubble. The savings rate dropped to record lows while debt levels were growing more difficult to service. In 2007 the first cracks appeared under our feet and accelerated quickly.

Housing prices collapsed and the economy ground to a halt. There was real fear in the air. Many investors today have no idea what market fear means. Fortunes will be lost when the inexperienced get their first taste.

Congress passed several bills to protect failing banks. If not for these efforts we could have looked at an economic catastrophe similar to the early 1930s. 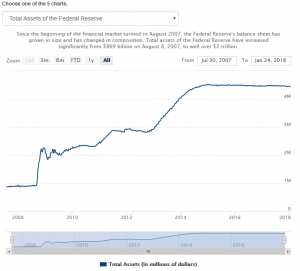 The Federal Reserve and central banks around the world dropped interest rates to zero or close to it without the intended results. The economy didn’t want to respond.

Some central banks experimented with negative interest rates. In the United States it came close. With exception for a few T-bills issued interest rates stayed a whisker above zero.

Due to the high levels of purchases the Fed was making the purchases started to extend to longer-dated securities and mortgage backed securities.

The Fed creates money as part of the debt process. When Congress spends more money than comes in from taxes the Fed can come in and buy some of those bonds and make a notation in their ledgers. This and the literal printing and coining of currency are how money is created. (I’ve greatly oversimplified the process of money creation. There are plenty of YouTube videos on the subject.)

Predictions were everywhere inflation would run rampant due to all this so-called money printing around the world. There was ample reason for the inflation fears. History is filled with instances where the money supply is increased significantly only to destroy the economy involved with uncontrollable increasing prices.

Why was this time different? There are no examples I can think of where this level of money creation didn’t cause an inflation shock.

Where Did All the Money Go?

With nearly $4 trillion added to the Fed’s balance sheet the economy should have boomed. In a way it did, but in a stealthy way.

Asset prices have been climbing. Housing in many parts of the country are at record highs. The stock market has added trillions to the net worth of investors.

Alternative investments sopped up some of the excess cash. Bitcoin is a good example.

But it wasn’t enough to account for all the “money creation”.

To understand what “should” have happened we need to look at some charts and explain some terminology.

M0 is the currency and coins you hold in your wallet. M1 includes cash and checking accounts. M2 includes all of M1 plus bank CDs, money market accounts, mutual funds and bank savings accounts. Each higher level of “M” includes all of the previous categories of M plus increasingly less liquid assets. For our discussion we can stop at M2.

There is also a multiplier effect when the Fed “creates” money. Banks are required to keep only a fraction of their deposits on hand while lending out the rest. This is called fractional banking and many people hate it with a passion declaring the downfall of Western civilization if it isn’t stopped.

Now that we have a few terms under our belt we can ask our original questions intelligently. Where did all the money go?

The short answer is all the extra money created by the Fed and central banks around the world stayed in bank vaults and at the central banks!

Central banks around the planet also loaded up on sovereign debt, both domestic and foreign. Today, trillions of U.S debt is held by the central banks of foreign countries.

Who Moved My Money

The real reason the economic liftoff from the Great Recession was so slow was because the economic stimulus wasn’t as stimulating as it should have been.

With more money available than ever it sat quietly in bank vaults. Economic growth wasn’t fast enough to justify increased lending so banks kept their powder dry so the money never hit the broad economy. The slow trickle of funds into the “real” economy provided modest, yet steady, growth.

But even modest growth for long periods of time starts to add up. Unemployment dropped from double digits to four and change. Greed and distant memories of fear from the Great recession emboldened lawmakers.

Unsatisfied with modest growth they got greedy and wanted it all NOW! Tax rates were cut massively and the market was off to the races.

But there is an unspoken problem in the room. Remember all that money? To get it into the economy the Fed had to lower interest rates to zero for a very long time. If that money were to ever be unleashed into the marketplace bedlam could ensue!

And now banks for the first time in a long time see plenty of reasons to open the vaults and start pouring out the money. Fractional banking will do the rest.

Take a look at the charts for M1 and M2 money supply. M1 (currency and coins in your pocket) has climbed steeply from $1.4 trillion in late 2009 to over $3.6 trillion today. Cash and coins (literal money printing) more than doubled in eight years! The fractional banking system can convert this physical money into about five times as much additional digital money! M1 seems to be the main driver of the steady economic growth over the past decade.

Now look at the M2 money supply chart. The money supply rarely declines in the U.S. so don’t be alarmed by the upward sloping curve. M2 also grew rapidly since the Great Depression with just under a doubling in supply.

The money supply charts in and of themselves mean nothing. (Okay, they mean a lot. Just play with me a bit longer.)

Money supply is only one facet of the equation. How fast that money percolates through the economy also makes a difference.

Look at the M1 velocity of money chart. The number of times currency changed hands in a year declined heavily since the Great Recession. Some readers will find comfort we are back to numbers similar to the 1970s. Don’t be.

Part of the reason the M1 velocity of money changed over time is due to how we spend. We spend with our debit and credit cards so cash starts to move less leading the Fed to print less currency as a percentage of the total money supply.

As less actual currency exists it tends to move faster as we saw in the economic boom of the 1990s. M1 velocity declined since the Great Recession due to additional supply, potential hording and reluctance to spend over fear of returning economic hard times.

Now think of this. If all the money tucked away safe and sound is unleashed on the economy what do you think will happen? Regardless what you think the unleashing has begun!

The only way for the Fed to sop the excess money out of the system is to keep raising interest rates. It could take equally high rates to equalize the supply and demand of money as it took for low rates to kick-start the economy.

With unemployment near 4% it will be hard to fill positions created by the rapidly expanding economy. This will require wages to increase (a good thing) while forcing prices to climb in tandem (not as good as wage increases).

What Does This Mean for the Stock Market?

Equities are on a sugar high right now. Low interest rates and inflation coupled with growing profits is the perfect recipe for substantially higher stock prices. But we have a problem.

The stock market had a few hiccups this week as interest rates on the long end of the curve are rising sharply in anticipation of what I explained above. The Fed will have a hard time controlling the long dated Treasuries. Investors will sell until rates increase to a level commensurate with the inflation risk of their income stream.

The stock market is in for a rude awakening as well. The Goldilocks economy has been over-stimulated. And as with any drug overdose the other side is filled with pain.

Interest rates and inflation are still low. That can change fast. As the massive quantities of money finds its way into the general economy from bank vaults and as fractional banking multiples the effects, the economy is sure to grow in at least nominal terms. Inflation is sure to follow unless you think this time is different.

A mere 3% or so growth rate the President promises isn’t enough to deal with all the excess money. I played with the numbers (back of the envelope) calculating what would happen if money started to move like it did in the early 2000s and the banks started lending all the extra money they’ve been holding in reserve. I come up with a U.S. economy at least double the size it is now (~$20 trillion) to as much as $64 trillion.

These are staggering numbers requiring massive growth in the economy coupled with significant inflation. The Fed may have no choice soon to raise rates faster or risk losing control on prices.

The next few years are going to be interesting. The grand experiment undertaken during and after the Great Recession has another side, a side we are about to enter.

Why Does the Stock Market Tend to Struggle in High Interest/Inflation Environments?

Before we finish I want to outline why the market tends to have an initial upward thrust before falling sharply in environments similar to the one we are currently in.

There are two reason markets struggle with high inflation and interest rates. The first deals with value. Remember the definition of value creation:

where the return on invested capital exceeding the cost of capital equals value creation.

As the cost of capital increases fewer deals get done because they are less profitable than parking the money in a risk-free investment, generally Treasuries. Fewer deals mean less economic growth eventually until the economy cools and we wait until another generation of uninitiated makes their debut.

The second reason stocks suffer in high interest/high inflation environments is the quality of earnings. When inflation is low interest rates tend to be the same.

If a company is generating 10% profit growth steadily with zero inflation and increases their growth rate to 15% with say 7% inflation, the earnings are worth less.

Either way equities suffer. With the amount of money we know exists out there, what it takes to suck it out of the economy and with the likelihood the velocity of money returns to traditional levels, inflation issues are probable.

Any readers remember the 1970s and stagflation? I do. I was a wee tyke, but I remember.

There is a lot of money out there looking for a home, kind readers. When a portion settles into your account the only question will be: How much will it be worth?