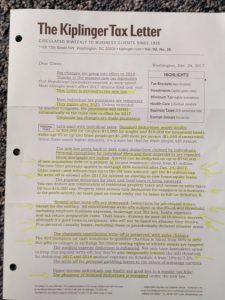 Plenty has been written about the recent tax bill. Most news reports repeat the same information. I want to expand on what is widely known to include some lesser opportunities to reduce taxes and pitfalls most people (and many tax professionals) are unaware of.

This post will cover a wide variety of tax issues that are changing. It will repeat a few facts published here and here previously.

Regardless, once these preliminary posts are out I will start working on more targeted tax topics the tax bill opened. A post I’m eager to write involves the issues surrounding the new business income deduction. The IRS will have to create a worksheet to cover all the issues in the tax bill designed to prevent people from gaming the system. I’ll attempt to create the worksheet before the IRS does and provide options FOR gaming the new tax laws. There will be plenty of opportunities for those who plan and plenty of risks for those who don’t dig deep enough into the Code to organize their tax matters optimally.

Finally, before we start, I’m leaning heavily on The Kiplinger Tax Letter (not an affiliate link) for this post. The words are mine, but Kiplinger is providing the mental tickler helping me decide what to include here and the order. The words are all mine with exception of what is lifted from the tax bill. Some things are hard to say in a new and unique way so I’ll parrot what you’ve read multiple times on other news outlets. I promise to add some of my patented secret sauce to keep it as fun as new tax law discussions can be.

Remember the tax rules for 2017. If a future Congress doesn’t address the temporary nature of the individual changes we go back to 2017 rules after 2025.

Personal exemptions: Gone. As if you haven’t heard that often enough.

In the past you could deduct interest on up to $1 million of new acquisition debt on your primary residence or second home. This has been reduced to $750,000.

However! the new rule usually applies to NEW mortgage debt entered into AFTER December 14, 2017.

Old loans use the old rules!!!

ALL home equity loan interest is NOT deductible after 2017. HELOCs have no tax advantages this year.

Pass the SALT: State and local tax deductions are capped at $10,000 annually for 2018 and after. You can use the full $10,000 limit on any combination of residential property taxes, income taxes or sales taxes.

Moving expenses: Gone, except for military.

Casualty losses: Personal losses are gone unless in a presidentially declared disaster area.

Alimony: Pay special attention to the dates here. POST-2018 divorce decrees with alimony are NOT deductible to the payer and NOT included in income for the recipient. The old rules still apply for prior divorces and those finalized in 2018 or earlier.

The good news isn’t all good for the recipient. Alimony isn’t taxable for post-2018 divorces, but alimony was considered earned income in certain instances prior. An alimony recipient can’t fund an IRA with post-2018 divorce alimony payments unless she has other earned income. This may sound mute, but consider the planning strategy of regular Roth IRA contributions with the intent of passing the account to beneficiaries after death. It’s an uncommon issue that still needs airing.

Charitable deductions: Itemizing has been pared back significantly due to the higher standard deduction. While many people will have fewer tax advantages contributing to a non-profit in the future, those who donate a large percentage of their income have an added tax break.

The old rule allowed a deduction for up to 50% of AGI for cash donations in any one year. That limit is now increased to 60%. Most people will not have an issue with this, but taxpayers funding a donor advised fund, NIMCRUT or similar philanthropic vehicle will potentially benefit. Unused charitable deductions are carried forward for up to five years.

Hobby expenses: Gone! This is huge for anyone with an income producing hobby. It may hasten your decision to conduct your affairs as a business.

Medical deductions: The old rule is back. Medical expenses are deductible once you surpass the 7.5% AGI threshold if you itemize. Unfortunately, the break only lasts for 2017 and 2018. Then it’s back to the 10% of AGI threshold.

Inflation indexing: We’ve talked about this before. The chained-CPI will be used for taxes which reports lower inflation. Over time this will bite every taxpayer hard.

LTCG: Long-term capital gains are the same as before with a notable exception. The break point where a higher LTCG rate applies is different from the actual tax brackets. You can thank the tax profession lobby for this added bit of complication. Actually, my peers had nothing to do with it, but it stands a good chance of lining our pockets nicely over the next years.

The net investment income tax of 3.8% survives. Lucky us. (Once again, always nice to see extra complexity as a form of job security for the guys with pocket protectors.)

AMT: The alternative minimum tax lives, albeit with a reduced influence. The AMT exemptions are higher: $109,400 for joint filers and $70,300 for the rest of the crowd.

The exemption phaseout begins at $1 million for joint filers and $500,000 for others now.

Health insurance mandate: Stop the high-fives! The mandate still applies to 2018! The mandate is gone afterwards.

Child tax credit: People are only hearing part of this story, too. The child tax credit is increased to $2,000, but ONLY $1,400 is refundable. It will make a difference for some low income filers.

A new non-refundable $500 credit now exists for 2018 and after for a non-qualifying child: elderly parent and disabled child are two examples.

Step-up in basis for heirs is unchanged.

Kiddie tax: In the past the kiddie tax was based on the parents’ marginal tax rate. This caused plenty of problems over the years for a variety of reasons we’ll avoid discussing today. Starting in 2018 the kiddie tax for unearned income and capital gains is calculated using the estate and trust rates for children under 18. There were a lot of old rules which changed several times over the years. The kiddie tax should be easier to figure because it’s calculated without regard to the parents’ tax information.

Retirement accounts: There was a lot of angst as Congress debated significant changes to retirement plan funding. The angst was for naught. The only notable change is the loss of the ability to undo a traditional IRA to Roth conversion.

ABLE savings accounts: In certain circumstances you can rollover from a 529 plan into an ABLE account tax-free. Payins are also eligible for the saver’s credit if made by the beneficiary over the $15,000 annual limit.

529 plans: Starting in 2018 you can now take up to $10,000 in annual distributions from a 529 plan for elementary and secondary education. This includes religious schools.

Corporate tax rates: Dropped from a top rate of 35% to a flat 21%. As one reader commented recently, this could be a tax increase from very small regular corporations. Business owners need to consult with their tax professional.

Business income deduction: I will be writing extensively on this topic in the near future. There are many issues to consider I want to fully flesh out.

Note: investors in REITs and partners in publically traded partnerships qualify for the deduction. Therefore, not only do business owners need to consider the new deduction, some investors do, too.

Business losses: People are not paying attention to the cap now on business losses! Joint returns are allowed up to $500,000 in business losses; all others $250,000. Any remaining loss is non-deductible in the current year and is carried to the next.

Business interest: The business debt interest deduction is capped at 30% of adjusted taxable income. The new rule only applies to businesses with over $25 million in gross receipts. Some companies are exempt.

I bring this up because I want to see how well this works as interest rates climb. It might play into investment decisions down the road. Also, higher interest rates could affect certain firms more than others due to their debt load. Thinks Tesla and similarly leveraged companies.

The 9% domestic production deduction: Gone! Not that I’ll miss it. I always felt it was a pain in the tail feathers to deal with.

NOLs: Net operating losses can only offset 80% of taxable income now and usually must be carried forward only. (Many states didn’t have NOL carryback rules anyway; it was carryforward only.)

Like-Kind exchanges: Are for real property only now as long as it isn’t held primarily for sale.

Transportation deductions: Most employer provided transportation benefits are no longer deductible by the employer. Biking is specifically excluded!

Paid family leave: I’m not hearing much about this new credit and I think it’s because it only applies to the 2018 and 2019 tax years. The credit is 12.5% of paid medical or family leave wages; more if the paid leave is greater than 50% of regular wage. Consult your tax professional if planning to use this credit. The rules are extensive.

Tax on College! Private colleges with over 500 students and over $500,000 per student in “non-education-related assets” are assessed a 1.4% excise tax per year!

In the United States we spend more on prisons than education, and if you haven’t noticed, we are getting exactly what we’re paying for. I suggest we add a new tax on prisons and jails and watch how fast the crime rate drops in these parts.