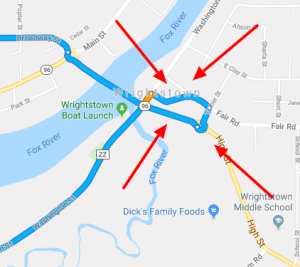 There are no signs showing how to make the loop onto the bridge. If you miss the loop you take the long way.

Earlier this week I had the opportunity to extend my Thanksgiving holiday by attending a few days of continuing education training. Northeast Wisconsin isn’t a bad place to get an education as long as you can get to Green Bay or the Fox Cities. But when you live in the middle of nowhere it takes planning and strategy to git er done.

Well, the plan was fine; the strategy could have used a bit more work. It’s been a while since I weaseled my way to Green Bay where the training classes were. The fastest way there was to take side roads the whole way.

My memory has started to slip these past years as the birthdays add up. Not having to visit Green Bay in a bit, I knew the trip was a straight forward drive with one exception; at Wrightstown I had to make a loop to get on the bridge to cross the river.

If you don’t cross the bridge at Wrightstown you have to take a longer, slower route deeper into Green Bay before swinging hard west to head out to the casino where the class was held. Confident as only an American can be, I went off memory. It was a gamble I was willing to take.

Sitting in a classroom all day listening to tax law is grueling. As soon as class was over I wanted to get home. Now less willing to trust my normally reliable brain, I decided to use the phone’s GPS. The last thing I needed was to miss the turn at Wrightstown. Then I’d end up going all the way to the Fox Cites to get home and that would add twenty minutes or so to the ride.

The GPS worked swimmingly at Wrightstown. GPS loves highways and it loved the route turning off at Wrightstown. But it didn’t want to take the side roads the way I wanted!

I followed the GPS directions and knew I was going off course. The darn thing wanted me to take highways as much as possible so I ended up on Highway 32/57. It wasn’t a terrible distance out of the way, but added ten to fifteen minutes to the drive. 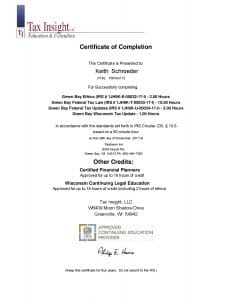 I was ready for Day 2! I used the GPS to get to the casino for class in record time. I was even able to use side roads, too.

Day 2 is always brutal. Day 1 wears you out and Day 2 grinds you into putty. Sixteen hours of intense tax law review has that effect on normal humans.

I wanted the fastest way home and hoped the GPS would be as kind on the return trip as the morning drive. Once again things went swimmingly at the Wrightstown turnoff. Then the GPS wanted me to keep going east until I hit 32/57.

Suspecting the ruse from the GPS I took note of how the squirrely turn at Wrightstown fed to the side road I wanted to take. When the GPS said to go straight I made the loop I made that morning and found my true heading home.

Rather than turn the GPS off now that I knew the way home I decided to leave it on and focus on my driving. There are a lot of deer roaming and it gets dark early this time of time. I wanted to get home and was in no mood to tenderize some venison.

The GPS kept telling me to hang a left at every cross road until I was only a few miles from home. The GPS didn’t care the side roads were a faster route; it wanted to get to a highway, any highway, as quickly as possible.

The Day the Sun Went Out

This past August we had a total eclipse of the sun. A new friend from this blog, Bernie, invited the Accountant family to stay at his place only a few miles from totality in Kentucky.

It was an awesome experience and included a new friend. But that isn’t the interesting part of today’s story.

When the eclipse was over our plan was to head to the Interstate and back to Bernie’s. Except seven quadrillion other people had the same idea.

The GPS loaded where we watched the eclipse, but once we got on the interstate coverage died. And so did the traffic.

The highway was wall-to-wall cars and weren’t moving. It took an hour to move a mile! I don’t see stuff like that in the backwoods of Wisconsin. Where I live a car coming down the road is an event. Either one of the few neighbors I have is up to something, we have visitors or someone is lost. Now I saw cars as far as the eye could see! 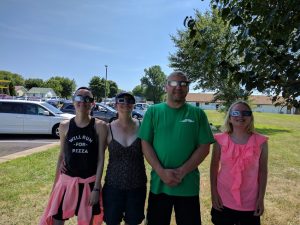 The Accountant family moments before the sun went out.

After a few hours some people were getting in trouble as their gas got low. Good thing I was smart enough to fill up after the eclipse before we headed back. Okay, maybe luck had more to do with it.

Cars were pulling to the side and some were stranded. If emergency services were needed you were SOL.

I’d had enough. Mrs. Accountant wanted to drive back so I studied the map. Without GPS the map was incomplete. Sick of the traffic and with evening fast approaching I wanted an alternative before it got dark and our gas started getting low.

I told Mrs. Accountant to take the next turnoff a half mile ahead.

Mrs. Accountant trusted my instinct. It took another hour to travel that half mile to the turnoff, but we eventually made it.

Some people had the same idea, but it was a serious minority.

Traffic on the side roads we light. We still had one problem. We needed to cross the interstate to get home. And like the crazy loop in Wrightstown, it wasn’t going to be easy.

Cell service was spotty but did click long enough to expand the map in the phone. As we traveled toward home we noticed every approach to the interstate was backed up for miles. Crossing the interstate could take half the night!

I searched the map for a side road crossing under the interstate without on-ramps. It was a gravel road, but there was only one other car on the road and we were moving just fine.

Once on the other side of the interstate we drove at the speed limit all the way back to Bernie’s place. It was dark by the time we got there.

Mrs. Accountant and I still think there are people out there on that interstate in Kentucky still waiting to move a few more feet.

The two stories above reveal the same lesson: the obvious choice isn’t always the best one. The GPS in Kentucky showed massive traffic issues and still demanded we stay on the interstate! I think people were staying on the interstate because they were preprogrammed to take the most obvious course home and their presupposed assumptions were affirmed by a piece of technology. If my GPS was giving bad advice; the same must be said for the rest of the crowd. 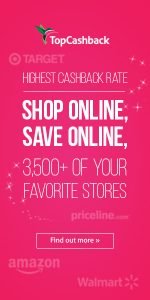 The interstate is frequently the right choice. Unfortunately it’s also the crowded choice. The side roads and lesser highways might be slower, but the traffic is generally lighter and the scenery better. The interstate doesn’t allow much opportunity to meet locals. State highways wind through small towns where you can get out and chat with folks. In my opinion it’s the only way to travel.

Other areas of life face the same dilemma. Technology wants us to always run for the nearest highway when that is the worst possible choice! People, unfortunately, react the same way the technology does.

Wealth experiences the same issues. Everyone is a genius right about now. The stock market has been straight up for nine years. Virtually every other asset class has also enjoyed heady gains. Bonds have been higher as interest rates declined. And now we get cryptocurrencies to add to the growing list of assets turning everyone into Einstein.

History is an important guide. Following the crowd doesn’t lead to riches. At best the crowd leads to mediocrity; at worst it leads to the poorhouse.

I don’t trust what technology always tells me. Right now technology (and the experts) tells us to pile into bitcoin and the stock market. Weeeeeeeee!

What could possibly go wrong?

Like the interstate in Kentucky after the eclipse, we might find it hard to move anywhere or even get off the crowded road. Before long we end up with real problems as night approaches and gas is running low with the kids in the back seat.

Heading for the highway sounds like the smart move. Sometimes it’s not! It can extend the drive a few minutes like my trip to Green Bay for a class or create serious problems like it did after the total eclipse in Kentucky.

The side roads are seldom crowded. Sometimes you get behind a tractor for a short distance or have to navigate twisting roads and frequent stop signs.

But at least you have the road to yourself and a whole lot less stress.