Better than Raising the Minimum Wage 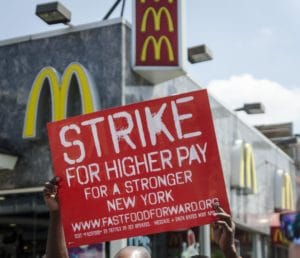 The minimum wage has come off the front page recently as the economy expands and other matters of national interest steal column inches from the headlines. The issues haven’t gone away. The minimum wage is sure to rear its ugly head again.

In the past the argument revolved around how much to raise the minimum wage if at all. Forcing wages higher can cause job losses, accelerate automation or cause businesses to close due to the additional overhead. On the other hand, working full-time at minimum wage is getting near impossible to survive on. There has to be a better way.

In 2015 Warren Buffett wrote an op-ed piece for The Wall Street Journal saying a carefully crafted expansion of the Earned Income Credit could solve the problem. The title of this post is from that op-ed piece.

Buffett’s recommendation has merit. There are issues, however, surrounding his suggestion which we will address here. We will go one step further and expose a massive tax break many small businesses are allowed but forget to claim. Even tax professionals miss this break in embarrassing numbers.

Issues from Both Sides of the Debate

A blog focusing on personal finance, wealth accumulation and preservation and tax issues will find itself in hot water over politics periodically. Unfortunately, when money is involved it can become politicized. Taxes are even worse. Suggesting tax policy invites personal harm. The only choices for me are to avoid the tough issues and provide cream puff articles or brave the turbulent waters. The minimum wage is too important an issue to ignore. So into the water I go.

The nice thing about the debate on raising the minimum wage is that both sides are right. Forcing wages higher at the low end of the wage scale risks reducing the number of entry level jobs many people depend on. A higher minimum wage also forces employers to reconsider hiring candidates who show promise but will require serious training. Training at $15 an hour is different from training at $8 an hour. The investment by the business owner can be too great, knowing the employee can sell her experience to any employer after the training is completed. 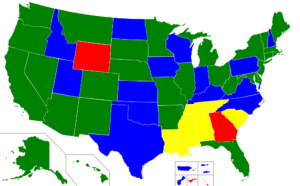 My moral compass, however, requires me to consider my fellow man. I like a higher minimum wage to reward people for productive labor.

When the minimum wage comes up for debate the battle is bitter. Each side’s argument is valid. The real debate is: Is it better to have fewer jobs at a higher rate for those who do. Some even suggest there should be no minimum wage!

Seattle made news when they moved to a $15 per hour minimum wage; small businesses have a lower minimum wage until 2021. Other jurisdictions have increased the minimum wage in similar fashion. The drive is strongest in high cost of living areas.

The first anecdotal evidence is starting to trickle in; there is some job loss at the low end of the wage scale. This makes sense. If something costs more (labor), the buyer (employers) will have a lower demand for labor. Overall wages of everyone combined is higher. It also causes businesses to raise prices to cover the additional costs. These additional costs are passed on to consumers.

If the employer serves the local market only the playing field in level. If competing in a national or international market the employer could be at a disadvantage.

Raising the minimum wage is the right thing to do as a conscientious human being, but there is a cost. The debate has been narrow since the inception of the minimum wage in the United States. The current minimum wage started at $.25 an hour in 1938, equivalent to $4.24 in 2015 dollars.

The minimum wage has risen over the years and reached a peak in buying power in the U.S. in the late 1960s when the rate reached nearly $11 an hour in 2013 dollars.

The debate is about a living wage for people working for their bread. No one denies people who work full-time shouldn’t earn enough for a reasonable living standard. The goal is to keep as many jobs as possible while encouraging people to join the workforce.

The Earned Income Tax Credit (EITC) began under the Republican administration of Gerald Ford in 1975. The EITC was supposed to be a temporary refundable credit to help low income workers pay for the increasing cost of food and fuel. Like most government handouts, it became permanent.

The EITC generally helps families with children. A few years back people without children could also receive an EITC if their income was VERY low.

Buffett’s suggestion is to expand the EITC. At first I hated the idea. Over the last twenty years tax returns have increased in complexity as government welfare services were shifted to the tax preparer’s office. The litany of credit for both businesses and individuals has increased the tax professional’s work load tremendously over the years. It also saves the government money as the tax office determines most of the eligibility to the benefit now.

My original hate for more tax credits involves fraud. Fraud in the tax office was limited three decades ago. With all the juicy credits now on a tax return, fraud procedures are a serious part of tax office policy if the tax office wants to stay in business. Things have changed over the years.

The time involved verifying information is a serious cost preparing every tax return. It increases preparation fees faster than the inflation rate while the taxpayer doesn’t understand why her fee is skyrocketing.

The EITC is the largest area of fraud on the tax return. And I think Buffett’s idea to expand it is a good one because we can prevent fraud while incentivizing work ethic and without punishing business owners.

Generally, the EITC is a credit claimed on the tax return and is refundable. This means you don’t need a tax liability to benefit from the credit. The biggest drawback of the EITC is when it is issued. If you are struggling to pay the rent in June, the tax refund due next spring is not going to do much good.

In the past employees could get a pro rata portion of the credit with their paycheck. Few used the opportunity because it was hard to understand. This option is no longer available.

My suggestion to rework the EITC is to take it off the tax return completely except for a year-end reconciliation to determine if the taxpayer is owed an additional amount.

The current EITC is complicated. You can be too old or young to claim the credit. The definition of a child for tax purposes is a longer discussion than even a fully devoted post could cover. Having children helps a lot in determining your credit.

You can game the EITC legally too. Cheating is rampant and the IRS and Congress know it. The credit starts small and increases until you hit the sweet spot (the level where the credit is highest) and then declines. 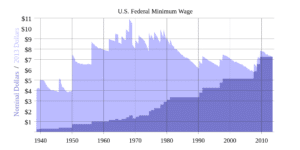 The number of children involved affects the credit. In effect, once you move above the sweet spot your tax rate increases as the credit declines; effectively, a higher tax bracket for those on the bubble.

If we required the EITC be provided employees with each paycheck it would do the most good when it is needed. Instead of a minimum wage we could have a minimum credit wage. If an industry could only support wages at say $10 per hour, the EITC could be set at $15 per hour. The employer pays the employee their wages normally and includes an additional $5 per hour on the same paycheck as a separate line item. The employer would get an immediate credit on her payroll tax report with a refund available no more than month later to employers who have more credits paid than payroll taxes due.

Some states, like Wisconsin, also have their own EITC. States and cities with high costs of living could institute their own EITC to deal with the minimum wage they wish to set. If Seattle wants a $20 an hour minimum wage, they can piggyback the federal program and provide proper funding.

Local businesses will no longer be at a disadvantage on a national or international level. A program like this would ensure maximum jobs with the lowest stress on the job creators. This modified EITC would also self regulate as the economy went through its normal ups and downs. An employer might be able to lower employee wages during a recession without the employee seeing a smaller paycheck. Good for the employee who keeps her job and good for the employer who has less financial stress during economic hard times.

My Gift to You

As promised at the open, I have a gift for my business owner readers.

People reading this post probably have a vested interest in the outcome. When it comes to the minimum wage, restaurants generally top the list of employers paying the minimum wage or close to it. And there is a massive tax credit for businesses with employees who are paid tips.

Basically, the Credit for Employer Social Security and Medicare Taxes Paid on Certain Employee Tips is a fancy way of saying employers can get a 7.65% credit for FICA taxes paid due to tips employees receive when the amount of the wages and tips combined exceeds $5.15 per hour.

I see this credit missed by tax professionals all the time. The credit is also reported on K-1s. When I have a client with a K-1 from a restaurant and no tip credit listed I know it is wrong. I send the client back to the business return tax preparer to get it fixed. The credit can be massive.

Even a small restaurant can have over $5,000 of tip credit per year. Business is challenging in the best of times. Employers with low wage employees really can use the tax break. Employees get the EITC and other tax breaks and the employer gets the tip credit.

It could be job security for all parties involved.

What do you think? Do you like my solution? Did Buffett have a great idea? What about eliminating the minimum wage and using my idea of the EITC to replace it? Should people with children receive a higher guaranteed EITC or minimum wage? Where should the tax money to pay for this come from?

I am interested in your thoughts. Technology is causing significant dislocation. Some people do well, others, not so much.

We can be a caring society with a powerful moral compass without harming business owners.