Buy A Car at an Awesome Price (From the Dealer)! 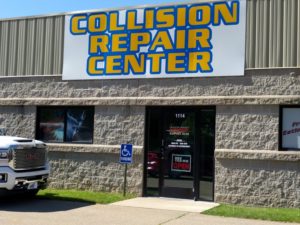 One moment please. I need to wipe a tear from my left eye. <sniff>

There, I am better now.

Regular readers probably were wondering what happened to me yesterday. I normally publish on Friday and there wasn’t a whisper of evidence a certain accountant was anywhere to be found. I have a good excuse for my behavior: my oldest daughter bought her first car.

The process of buying her first car took time. She was working at it for 6 – 8 months. Dad didn’t do it for her either. I only gave advice; so like dad. She did all the work searching for a car and my job was to shoot down the idea. In the past I bought all my cars from the bank or credit union. Unfortunately, most financial institutions no longer mess around with selling their repossessed vehicles anymore, electing to move the assets at auction.

Unless you have a dealer’s license you can’t buy cars at auction. The effort to get and keep such a license is not worth it if you only buy a vehicle every 10-15 years.

My old bag of tricks disappeared since my most recent auto purchase. I didn’t have much advice other than to keep your eyes open for an opportunity. Not the most powerful advice I’ve given in my life. (I love you, sweetie.)

Junior Accountant needed a car and she also needed to learn the process. She would learn nothing if I did it for her. Besides, a new set of eyes might reveal a new way to get a reasonable deal on a set of wheels.

The first stop was the used car dealership. She was out the door so fast I swear I saw sparks fly. It was an eye opening experience for her. The prices were inflated, the vehicles mostly junk and then they wanted you to use their financing at 28%. I have words to say when that happens, but I promised to clean up my writing. No more f-bombs (unless absolutely necessary).

Since it was my daughter’s first car, she needed to walk all the steps. I had her research all the banks in town and call a few of them to make sure they weren’t selling their repossessed vehicles to the public. A few still were, but these credit unions didn’t make many car loans so there were no cars available.

Banks and credit unions had been my best source of wheels for the last 30 years. The banks loss was my opportunity. I was able to buy a relatively new car (usually around 2 years old) for around $4,000 under Blue Book. Not bad. You had to wait for the right car and you couldn’t be picky about what you drove. When the right deal showed up, you snapped it up. For me, once I snapped up a deal I was done for another decade. (No wonder the banks gave up selling to the public with such finicky demand.)

For Sale by Owners was another way to buy a car. This is where I felt the process should head.

My daughter spent serious time on Craigslist researching cars. Most autos listed were from dealerships and my girls had had enough of that racket.

Mrs. Accountant went with my daughter each time a car of interest appeared. Some vehicles listed by the owner had merit. There were no real deals to be had unless the vehicle has serious issues needing repair. For the most part, people selling their own car did their research, listing the car at Blue Book and holding tight. They knew their car would sell at that price reasonably fast.

People selling their own vehicle were more honest than the dealerships. Owners frequently pointed out flaws. If anything, my faith in humanity was restored.

My daughter needed a reliable car at a good price. She wanted a deal like dad brags about getting. And the search went on.

As so often happens, the greatest opportunities appear when you least expect it. My sweetie was headed to the doctor when she noticed a business with cars for sale across from Goodwill.

She convinced Mrs. Accountant to go with her. The business in question was a collision repair shop. The owner also has a second business buying cars from auction with collision damage. He then repaired the damage and puts the auto up for sale. 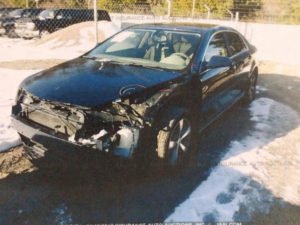 Mrs. Accountant and my daughter looked at several cars at this establishment, returning again and again. Finally they convinced me to take a look.

I’ll be honest. I did not expect much. The potential problems with such vehicles were more than I would consider accepting.

Still, I kept hearing the asking price and it was compelling. These cars were selling below Blue Book!

The business owner was not a typical used car salesman either. Nobody came out to greet us when we walked around his lot. When we entered the building there were no salespeople at all!

I asked about a specific car, a 2009 Chevrolet Malibu Hybrid. The desk clerk called the owner over. He pulled the file from his cabinet and showed us the details. “Here is the car when I bought it”, he said, highlighting the collision damage.

There were pages of notes showing what he did to repair the car, including expense receipts. He showed us Blue Book; his price was lower. (I checked Blue Book before we arrived and he did not deviate from my research.) He said he can’t really sell collision damaged and repaired vehicles at full Blue Book.

One Man’s Junk is another Man’s Treasure

The car we were interested in was not a SALVAGE vehicle. That is not always the case.

The Malibu had front driver’s side collision damage. I included a before and after picture for you. My daughter picked the vehicle up for around $1,000 less than Blue Book which means she didn’t take a hit to her net worth the moment she drove it off the lot.

The car was safety inspected and we gave the vehicle a once over to assure there were no hidden issues. A few minor issues were addressed. 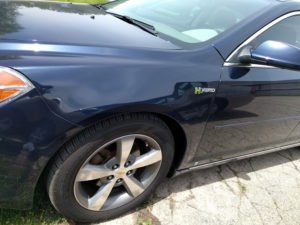 All in all it was a pleasant experience. My next car will probably come from the same business or a similar establishment. Cars are something I don’t want to think much about. I want value, if there is such a thing in a wasting asset, and I want it to work for a decade or so.

Since buying a repossessed car from a financial institution is getting harder by the day, it was about time I found another reliable source of purchased transportation.

There are differences between buying from a For Sale by Owner, the bank, a traditional used car dealership and the guy repairing damaged vehicles for sale.

When I bought a car from the bank it usually was two years old. Older cars were available, but I liked the newer cars so I could run the thing at least 15 years. I don’t like shopping for cars!

Most of the cars available at the collision repair dealership were older. My daughter picked up a 2009 Malibu. The car is already eight years old. As an FYI, in Wisconsin, cars don’t often make it to 20 years due to harsh winters and road salt. Therefore, in my opinion, the Malibu has another eight years of life before it becomes less road-worthy.

Sometimes the repaired vehicles have a salvage title. 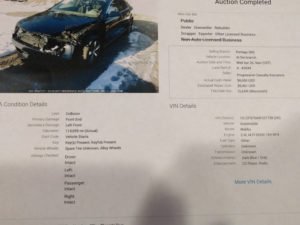 When she decides to sell the vehicle, if she doesn’t run it into the ground first, she will need to disclose the car’s history, but otherwise the car should sell for close to Blue Book. The car is also insured for its value.

[Insurance side note: I do not insure my personal vehicles for collision, especially if the value is under $5,000. Since this is my daughter’s first car I am walking her through the whole process so she is familiar. ]

[Loan side note: My daughter could have paid cash for the vehicle, but with interest rates low I wanted her to experience what it is like sitting at the credit union applying for a loan. She has a very small loan so collision insurance is required. Once she pays off the loan in a year I will recommend dropping collision.]

Salvage vehicles are repaired to good working order, but sell for even less! Before you buy a repaired salvage vehicle, be aware the title will say: SALVAGE.

Each state has different laws. In Wisconsin insurance companies can only insure a salvage vehicle for 70% of its value. (Or so I was told.) The credit union said if it was a salvage vehicle they require 25% down. Neither of these issues is important since readers here don’t have auto loans or insure for collision. But I wanted to mention it for any souls wandering through not aware of our unique demographic.

I missed yesterday’s publishing deadline so I could help my daughter close on her car and walk her through the whole process. I also wanted to ask more questions before publishing. Many readers should find value from this new information.

There is still the risk it could all go wrong. There are no guarantees. I’ll update if anything meaningful changes.

Please share your experiences in the comments section below. Include laws applicable to where you live.

My guess is this will work pretty much anywhere on the planet cars are driven. Virtually every community has at least one or more of these collision centers buying schmucked up cars and breathing life back into them.

I like the recycling aspect of revitalized cars and love the savings.

Hope it helps you too.