Get There Before You Arrive

How long does it take to crawl out a hole you dug? How long to formulate a plan? Execute it? Reach your goal? Financial independence (FI) is a goal most people have. Some want it bad at a young age and work toward that goal. Others wait until Father Time ticks closer to the traditional retirement age. Still others get a wakeup call when their body fails in some way.

Before this blog I was a tax Endorsed Local Provider (ELP) for the Dave Ramsey organization. His story resonated with me. I agreed with Ramsey that debt is the acid which destroys the vessel that holds it. Ramsey is fanatical against any kind of debt; I am a bit more moderate in the faith. Still, debt is a problem for many people.

Before FI can be achieved debt first needs to either be eliminated or seriously curtailed for most people. The Ramsey plan is to eliminate all debt and invest in actively managed mutual funds offered by a financial advisor. If you read that last sentence carefully you will begin to understand why I could no longer in good conscious be a Dave Ramsey ELP. Ramsey’s philosophy is right on so many levels and wrong on so many more.

Debt in and of itself is not bad. It’s just a thing. Too much debt is the real issue. Credit card and similar high interest debt is caustic, no doubt. A home mortgage can make all the sense in the world. Even a small, short-term business loan is a positive in many instances. A blanket faith in no debt is something I don’t subscribe to. When very wealthy people borrow for a home or investment it is frequently the right choice. Borrowing $10,000 for working capital in your business instead of selling a profitable income producing investment I will argue is a good call, especially when you consider the tax consequences.

Here is where I will get into trouble. I am NOT a fan of investment advisors. Most are broke or at least have a smaller net worth than their income level would suggest. It’s matter of physician, heal thyself syndrome. Investment advisors are broke because their advice is not worth as much as they claim or they refuse to save at the required level to have an expected level of financial wealth compared to their income. In other words, they don’t take their own advice. Over the last three decades it was a rare occurrence to prepare a tax return for one of these professionals where they had a high net worth. They had high income, but not much to show for it.

A Wise Man Once Said

At Camp Mustache a few weeks ago, Doug Nordman, a retired military guy, gave a presentation on the stock market over his adult life. Once again he dropped one of those golden nuggets I am only too happy to pick up. He said financial independence, your net worth, was a product of your savings rate and the fees you pay on your investments. If I were so wise I would have come up with something so simple and elegant.

Armed with the simple knowledge of FI as offered by Nordman, we return to my days as a Ramsey ELP. Understand I agree with Ramsey on many levels and recommend his program. What he has produced is powerful and effective. The reason people following Ramsey need a financial advisor is because they have shown no talent to do the basic steps necessary to turn debt into a tool or eliminate it and invest intelligently on their own. My hope is you can eventually do it on your own if you are a Ramsey follower. Ramsey is not cheap and neither are investment fees in the broker’s office. It all hurts your FI goals. Ramsey and the broker are necessary only until you can walk on your own. And no, I don’t have an emergency fund. Long before you reach FI an emergency fund is not needed. You have plenty of money accessible for nearly any possible emergency.

Plan! Ain’t Got No Plan

Ramsey convinces people they need a plan. He even provides the skeleton of your plan in the form of his financial Baby Steps. I like it! But here Ramsey and I disagree again. Ramsey says you should pay off low balance debt to start the snowball rolling. His goal is based on psychology. By eliminating debt sources quickly it will give you a psychological boost to remain faithful to the program. All this might be true, but you are an adult. Right? If you are dug in deeper than a tick on a hound you need to pay off the highest interest rate debt first! If you have psychological problems might I suggest a lobotomy? You can either dilly dally around in poverty of you can subscribe to the Wealthy Accountant method and get your tail to FI as fast as you can. That’ll do wonders for your psychology too.

Goals. The thing people love to hate. Don’t worry, I will not put you through a goal setting program. . . today. I want to get to the premise of this post first. Goals are well thought out things you want to accomplish; plans are what you create to get there. We will focus on plans.

The first goal most Ramsey clients had when they walked through my door was to eliminate debt. FI wasn’t even in the cards. These people couldn’t even fathom a serious positive net worth having lived in financial Armageddon for so long.

It was time consuming, but it had to be done. I had to get these new clients to think ahead to the next step. Paying off debt is not unilateral. After crisis debt levels are reduced it is better to institute saving/investing while continuing the debt reduction process. After crisis mode you want, for example, to invest in your work 401(k) at least to the level of the employer match. This is free money! It is a small start, but all journeys begin with the first small step, a Baby Step.

As people worked through the game plan to reduce debt and build a serious net worth, they became disheartened. They visualized in a linear fashion the reduction of their debt load. It actually works exponentially. (Before you math geniuses tell me I am wrong, read on.)

The linear debt reduction approach might mean it take three years and two months to eliminate debt. That is a really long time for most people to wrap their mind around. I always tell them not to worry; it will go faster. But the numbers? The math says three years and a bit! Don’t worry, I assure, it will take two years and a bit, plus you will have a modest amount invested as well by the time your debt is gone.

Why does it happen faster than planned in 90% of the cases? There are two reasons. First, when you pay off high interest debt it makes a larger difference than simple math dictates. (It also illustrates how caustic high interest debt is.) When you make an extra $100 payment to an 18% interest credit card you just cut your spending $18 per year, every year from then on unless you are dumb enough to re-dig the hole. (Note: reduced spending (interest is spending) is tax-free. The extra cash flow to your budget from reduced spending is never taxed!)

The second reason is the coups de grace. Your debt load dies faster than planned because you have a plan! For example: you allocate $100 a month for the light bill. Now, aware of a light bill ceiling you do things to keep the bill below $100. Dining out is even easier to reduce as you learn to cook more meals at home and brown bag lunch at work. Your budget, your plan, assumed a $100 light bill. When you reduce the bill to $92.75 you have more free cash flow in the budget to illuminate debt. And additional reduced debt on an 18% credit card snowballs fast. Living a mere $100 below your original budget per month used for additional payments on high interest debt does not reduce your debt only $1,200; the additional reduced debt no longer accumulates interest! The first additional payment reduces your interest expense by $18 the first year. But the second payment goes even further because more goes to principle because there is less interest to cover due to the prior month’s extra payment.

Eliminating debt is only the first step. The second step is FI. Once debt is adequately reduced it is time to start growing your wealth.

A few years back I ran across a blog called 1500 Days to Freedom. Here was a guy, Carl, who planned on building a million dollar debt free portfolio in 1,500 days. I showed the blog to clients and staff periodically with my sage wisdom, “He will get there sooner than planned. Just watch and see.” Little did I know Mrs. Accountant and I would spend a weekend with the guy years later. 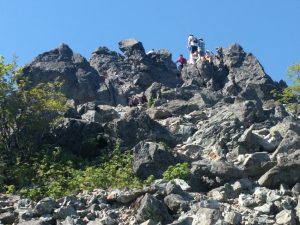 Carl’s investment portfolio broke the $1 million mark in under 3 years, but he still had a small mortgage. Not all debt is bad so he kept the mortgage (for now) and upped his investment goal by an equivalent amount. Goals/plans are like that. You can change the rules when it serves your needs and the police rarely get involved. He reached the new goal in three and a half years. Go figure!

So why did Carl do so well on his wealth accumulating phase? The same principle applies to wealth accumulation as applies to debt reduction. Your basic plan assumes you meet a minimum amount of investing, but you usually beat your goal, if only by a bit. Those extra bits compound fast! Also, most people take a ruler and strike a line from the lower left of their goal chart to the upper right. But you forget the first month’s investment also earns money so you have more in month two. It compounds and keeps compounding!

Smart readers will notice I said month two is more than month one as if investments always go up. Good catch guys, but there is one last mystery to solve in the rapid wealth building industry. I learned this trick from Nick Murray. When I was in the investment industry back in the 90s, my broker/dealer brought in Murray to speak at our annual conference. Murray was retired from mutual fund sales, but had a long career starting in the 60s.

You many notice this is a different way of looking at dollar cost averaging. People freak out when their plan is delayed due to a market decline. Market declines happen a lot, but it always goes back up and more! Always!

When you focus on how many shares you own you are less likely to freak out. Regardless the severity of a market decline, you still own the same number of shares. Nothing really went down if the value is still in the companies the market is comprised of. Get it?

It messes with the mind how fast money can work in your favor. You’ve experienced how fast, and bad, it can work against you. It works even faster when you put the power of wealth building on your side.

You will get there before you arrive.