Here is How You Can Piss Off Donald Trump 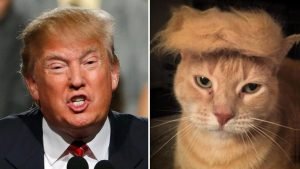 Disclaimer: This is not a political rant! The time is ripe for this message and Trump happens to be President. It is meant as satire wrapped around a serious message you must follow or suffer the financial consequences.

Nothing is more fun than good times. The recent run in the stock market in nothing short of incredible. After years of slow growth economy and low inflation coupled with a rising stock market, the stock market has exploded. The chart has gone parabolic! But this is not a story about investing or the stock market, however. This story is about pissing off Donald Trump.

Promises of faster economic growth and more high paying jobs face reality after Election Day. President Trump has hitched his wagon to a promise of hyper economic growth, in the neighborhood of 4% or higher. Depending on the day, a lot higher. I’m guessing if things go well we can see wages double every three, maybe four, years. And the best part, no inflation while the government pays off the national debt and increases spending across the board. Such are the promises of politicians.

And in these “best of times” you think it will last forever. Think 1929 or 1987 or 1999. Oh, for the heady days on 1999 when broad stock indexes sported triple digit P/E ratios. How can you lose? The future is clear to the horizon. Life is good, just ask the government.

But you don’t like President Trump. Even those two words together turn your stomach. How can a misogynistic scoundrel, Russia loving, Mexican wall building, China hating, swindler like that be President? He said nasty things about your mother and you are not having it. You want to hurt the bastard (without going to jail). How dare he win an election without winning the popular vote! It isn’t fair! Do I have to write every sentence with an exclamation point? Guess not.

There has to be a way to rip the façade off the man who insults women and every known ethnic group. The only (somewhat) sacred demographic is white middle aged men and it is starting to look like a gay pride parade around here. Which, when you think of it, is another group the Trump camp hates! Your blood boils as you plot your revenge. You can hurt him. You can hurt the whole crowd of miscreants in the White House.

You begin to formulate a plan. A plan so devious they would give you the chair for it. (Actually, it might be a very nice, custom-made chair perfect for the sitting room, but I digress.) You can’t shoot the guy. They whoop up on ya pretty bad when you do stuff like that. Besides, the guy is too stupid to suffer as he goes so it is a nonstarter. You want something that hurts the bastard day after day with grinding and gnashing of teeth where he burns in hell forever and ever, suffering and screaming and . . .  ahhhhhhh!!!

Then it occurs to you. You know exactly what you will do to punish the man who insulted the woman who brought you into this world. What you have planned is so devious even the devil himself will quake in your presence. You finally figured out how you can piss off Donald Trump daily till his dying breath.

President Trump prides himself a deal maker, an uber-successful business owner. Take away the one thing he prides himself in and you rip his identity from his skull and trample it in the gutter of flowing raw sewage. (Wow. Even I am impressed by my contorted words of bitterness. Look out Stephen King, you have competition.)

The plan is simple and costs less than nothing. All you do is stop spending. Only the most basic of needs are satiated. Debt is retired, bills are paid and then spending grinds to a halt. You start biking to work and preparing your own meals. The massive pile of cash you accumulate needs a home so you invest it in index funds. (You thought of buying gold, but your tax guy told you gold is not a good long-term investment so you took his advice and bought Vanguard index funds, you sly dog you.)

Your solo efforts are too small to dent the economy so you enlist an army to march to war against or the orange haired menace. You start a blog and preach early retirement, saving, investing, legal tax reduction and frugality. It starts slow at first, but before long the message spreads. Soon thousands, then tens of thousands, then hundreds of thousands, nay, millions of faithful followers heed your message of responsible spending and saving.

It becomes a cult for fucks sake! God help us all.

Only a few years into his Presidency, Donald Trump faces economic headwinds like never before. The economic effects were impossible to ignore. Household debt declines to levels not seen since the 19th Century. Yes, 19th Century. Interest rates and inflation remain low with the newfound frugal habits of respectable men and women the world over.

Jobs growth slows; GDP declines. You achieved your goal. You managed to piss off Donald Trump without breaking a single law. Not a one! (Well, okay. Except for the time you spray painted an orange mustache on a Trump election campaign poster. But, hey. It’s only illegal if ya get caught. Right? Oh, piss off, as our good friends in the UK would say.)

You grin with inner pride as you single handedly mount a worldwide army to destroy the menace from 5th Avenue. You secretly rejoice as the Republicans in Congress buzz like bees over the economic catastrophe.

Then the best part of all starts: 3 a.m. tweets! President Trump is so mad he can spit nails. The government is so pissed at you they forget about Snowden and put all their efforts against you. Trump demands you be brought before him.

People either love you or hate you. Half the world wants to protect you and crown you king while the other half want to mails little, itty-bitty pieces of you to the White House as a gift to the commander-in-chief. 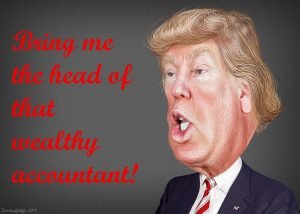 Reaching your goal of pissing off Donald Trump sounded a lot more fun until he issued a fatwa against you via a Twitter storm. Why is he so pissed at me? you complain. All I did was tell people to pay their bills, retire debt and live the good life. I’m the good guy!!!

Run as hard as you may, the masses of faithful found you tucked away in your hole behind the farmhouse. They dragged your sorry ass into the sunlight to be exposed for the fraud you are. They stuff you into an SUV (a fucking gas-guzzling SUV!) and drive you to the capitol.

It is a long drive from Wisconsin to Washington D.C.  Crowds line the road all the way cheering their support. As you recount all your actions your heart sinks lower and lower. This is how it ends, you think to yourself. All you did was tell people to spend less than they earn, save, invest and act responsibly. Why do you have to suffer the consequences for your actions? Why?

The brainwashed followers of President Trump grab you by either arm and direct you into the Oval Office. You are not getting away. When you see the great orange haired narcissistic demagogue you fall to your knees and start bawling, “I don’t wanna diiiiiiiie!” You inch forward on your knees until you are at the President’s feet.

You reach out and hug his left leg like a dog greeting his master coming home from a long day of work. You contemplate kissing his shoes, but decide a long painful death was more palatable than kissing Donald Trump’s loafers. It was a close decision, yet one you were still fully capable of making and adhering to.

Your world and life was at an end. A sort of calm came over you as you realized how quiet the room was. You stop sobbing, out of tears to shed. You accept your fate. It is then you realize you deserve everything you get. Telling people to save and pay off debt. Really! What the fuck were you thinking? It’s un-American!

Today is the 200th anniversary of one of the most bizarre events in American history. A wealthy accountant from the backwoods of Wisconsin started a war against then President Donald Trump. He built an army of followers who cut their spending, saving and investing the difference.

President Trump knew his plan to build walls and raise tariffs would never work. When it looked like all his plans would fail, a savior rose from the backwaters of this great nation making America, yes, even the world, great again.

The message of this accountant resonated with the masses sick of living under the yoke of debt and poverty. He taught the people spending was the problem, not income. People started living better than ever before in history after his campaign of terror set the world free at last.

President Trump had no idea where the money would come from for his massive infrastructure rebuilding plans. More public debt or Federal Reserve money printing would only make matters worse. Then this crazy accountant came out of nowhere and saved the whole thing from collapse. All the saving people did provided the funding for the programs to make the human race great again.

Never before in history did people bike so much and eat healthier. People worked less and had more. The economy purred like a kitten. Before long debt collapsed around the world as people and nations discovered a new economic model that was sustainable. The world changed that day for the better.

Today we remember an American hero who showed us the way 200 years ago. Today in history, a wealthy accountant received the Presidential Medal of Freedom.

[Footnote: Conspiracy theorists claim the wealthy accountant was sobbing and groveling at the President’s feet prior to receiving the highest honor a President can bestow upon a civilian. This journalist finds that to be the crazy talk of radicals trying to sully the good name of a wealthy accountant who happened to live in Wisconsin 200 years ago. Never forget what he did for us.]

Serious endnote: I am writing this as the stock market roars higher and the promise of accelerating economic growth is in the air. This is a dangerous time. I’m not talking about the stock market; I am talking about your spending habits. Don’t drink the Kool-Aid. Going back to old spending and consumption habits will come home to roost later. If anything, now is the opportunity to double down on your wealth building program. Pay down debt if you have any. Max out tax advantaged accounts. Don’t worry about the current level of the market. There will be a times when it goes down a lot. As always, it will also rebound to new highs. Excess spending is a 100% loss you never come back from so keep a tight lid on consumption.

Finally, if you are in or near retirement, now is the time to fill the short-term fund to maximum. You should have at least two years of spending minimum in a safe short-term fund. Money markets, guaranteed bank deposits and short maturity Treasury bills will do the trick. Enjoy the ride.