Living Without Money, the Spending Fast and Buy Nothing Day 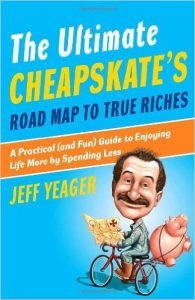 The Western word is being destroyed by a select group of people determined to live within their means. From artist Ted Dave and his Buy Nothing Day movement to Daniel Suelo who decided to live without money to Jeff Yeager and his spending fast to Mr. Money Mustache and his grand scheme to keep spending low, even when income rises, we face the greatest economic crisis of our generation. Or are we?

All too often we act as if the economy were an actual living being. It is not. The economy is only a construct of the human imagination. Can you image any animal living in crisis because their local economy collapsed? Even humans, thousands of years ago, did not worry about this crazy thing we call the economy. Somewhere between there and here we convinced the vast majority of people they are duty bound to feed this imaginary beast.

Spending lubricates the beast. It does not matter if the spending is on stupid stuff. Buy a Hummer and save the economy, they say. That was the mantra a decade ago. Remember the government’s response the 9/11 attacks? We were encouraged to keep spending to show the terrorists we would not be affected by their actions. But the terrorists did win! They got us, as a group, to engage in insane spending habits sure to destroy the one thing we worship above all others: the economy.

The real question we all need to ask is: Why is the economy so important? The “recorded” economy is what the government really cares about. It is this recorded economy they can tax and tax hard. Taxes are highest on owning stuff like real estate and the movement of money (spending). The government so far has been unable to tax things like: inviting friends over for a beer and enjoying good conversation. Rather, the government prefers you go to the bar, spend 20 times as much, and don’t care one bit if you enjoy it or not. By spending more you lubricated the economy and that is good for the country, or so they say. During World War II the government told us our patriotic duty was to “Buy Bonds!” and spend less on yourself. Today we are told to spend like drunken sailors by the very same entity. Each bit of advice was self-serving, but the saving mantra created a world super-power. The 1950s and 60s were times of awesome economic growth fueled by a high savings rate. Today we fuel the economic flames with debt and each new obligation has less effect than the last.

The Daniel Suelo’s and Mr. Money Mustache’s of the world are not the problem; they are the solution. If you are happy, satisfied with what you have, does it matter if the economy grows? Once you cover the basics and few niceties it is time to move away from the “more is better” mentality. More is not better! One aspirin cures a headache; a thousand give you a bleeding ulcer and kills you. The same applies to everything in life. Everything in moderation. But moderation does not keep the economy humming or ever increasing taxes flowing to the government.

Inside your home there is also an economy. If you don’t spend money today your household experiences a Great Depression. Sounds stupid when you think of it that way. You stay home and prepare a nutritious meal, enjoying it with the wife and kids and somehow you created a massive problem; you destroyed the local economy! But the local economy means absolutely nothing. Your life’s mission is not to see how big you can grow the insatiable economy.

If you want to create a better community, less spending goes a long way toward that goal. Savings are what fuel the “real” economy. The real economy includes only the basis: food, shelter, clothing. Once the basics are covered we are only forcing the economy larger. There is no real value to spending a thousand dollars taking the family to see the football game. I argue you gain more pleasure playing ball in the back yard or in the park with the kids.

Economic recessions (all recessions are of an economic nature) mean nothing if you have ample savings. Think of it this way. I grow a garden and can and freeze my ample excess produce. When I enjoy my garden’s bounty in mid-January am I concerned? I hope not. My savings of produce allow me to live off the summer’s gift. This is a form of saving with a zero percent rate of return. So low interest rates are not an excuse to not save and invest more.

Enough complaining. We should all agree saving more is better than spending more than you earn. The stress of overspending destroys marriages and other relationships so it is important to learn to feel satisfied with what we have.

Your personal savings rate should exceed 50% during your working years. Your mindset must be: half for now, half for later. Unless your income is below $20,000 (in the U.S.) it is more than possible to live this way. Heck, Daniel Suelo lives without any money at all. Most people need to drop their savings into an index fund and let it ride. Today’s investment soldiers will reproduce like rabbits. Within 10 – 15 years you can retire from forced servitude and pursue your heart’s desires. This does not mean you suffer for 10 – 15 years. You can live very comfortably on $20,000, $30,000 or $40,000. When you start looking at the stuff you are buying you will realize how much of your life you have wasted chasing stuff of no value.

The world would not end if there was no money. Money is only an exchange of value for debts owed. Therefore, money is really a part of the debt transaction. Money is debt. Investments, on the other hand, are not. A small business (and what better way to live life than running your own business) should produce profits. Invested capital earning more than the cost of capital creates value.

We are so used to having money (cash, credit cards, checks) on us at all times (same with the dreaded cell phone) that we feel naked and vulnerable when without money on us. We justify our fear by saying if we have no money on us at any particular moment we are a vagrant. You are not a vagrant if you leave your wallet at home!

Train yourself to feel normal without money on you. Go for a bike ride or long walk without any money on you. Remove temptation to stop for a cup of coffee; bring a hot cup with you from home. Graduate to leaving your wallet home when you go to work or visiting friends. I have seen people freak out when they try this. It’s nuts! Just because you cannot buy something at the drop of a hat should not cause you angst. You are nowhere near the level of Daniel Suelo, living your life completely without money. You are not a consumer unit; you are human being with needs and desires that transcend money. There is more value in family and friendships than spending money.

Starting small is important; no ladder is climbed starting on the top rung. I recommend a one-day spending holiday to start. As you flex your financial muscle you can work up to a full week spending holiday. Once you get the groove you can go crazy insane with a one-month spending holiday. (FYI: I max out at around a week. A whole month causes serious challenges.)

The spending holiday needs clarification on what “spending money” is. Eating is not spending money; neither is turning on the lights (unless you want to take it that far). Here are some of the things you will do and avoid during the fast:

A one-day spending holiday should not even be a challenge for you. I hope you strive for a one-week spending holiday or even a two-weeker. It is liberating to have large chunks of time where spending is not a part of your lifestyle.

When Vancouver artist, Ted Dave, founded Buy Nothing Day people did not notice until Adbusters magazine promoted it. In the United States, Buy Nothing Day is the Friday after Thanksgiving Day, Black Friday. This is traditionally the biggest shopping day of the year. When ads were purchased to promote Buy Nothing Day, retailers complained and had the Buy Nothing Day promotions shut down. (Gotta keep the economy going, ya know.)

A fun family event is to plan twenty Buy Nothing Days a year by putting them on the calendar in advance. Every month you can have one or two days where money is not the focus. Take the opportunity to spend time with your children and/or parents. Talk about current events or school, hobbies, good books, and similar interests. By taking an interest in yours children’s lives they will end up well adjusted and happy; by spending quality time with your spouse or significant other you can build a powerful relationship that lasts; by spending time with your parents you can enjoy the massive legacy of knowledge the older generation has gained through experience.

Of course, this is all only a start. In my household we don’t buy Christmas presents or presents for any commercial holiday. We share experiences and build gifts with our own hands. It has been a long time since we had a Buy Something Christmas. Birthdays are times to spend together. Gifts should never be an obligation satiated with cheap plastic junk pre-made for the landfill.

You can keep spending if you want. You don’t get a retirement then. You either save for future spending or you must keep working until the day you die. Spending holidays and buy-nothing-days grant you the ability to control your life. It is only a few days a month where you can do whatever you want. The rest of the month you can return to your spending servitude. It is good for the economy.